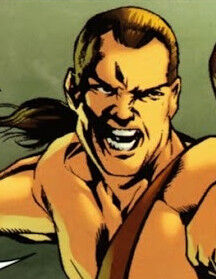 Ajax was an Argive warrior who lived in his great house in Locris. He was the son of Oileus.

He was known as Ajax the Lesser was named this way to differentiate him from the more famous Ajax the Greater.[1]

He was one of the warriors who sailed to Troy to help Menelaus retrieve his wife Helen who had been taken by Troy king Priam's son Priam.

After Ajax the Greater's death, Ajax relinquished his former "Ajax the Lesser" name.

When the Achaeans finally entered the city, Ajax went to the temple of Athena where Priam's daughter Cassandra had found sanctuary after her family and her lover Coroebus had been slain.

Intending to took her as his concubine, he was stopped by fellow Argive Diomedes, outraged that Ajax had desecrated the temple of Athena. The Argives stonned him and he fled himself into the temple for sanctuary, saving him from his former brothers-in-arms, who pursued the pillaging of the city.

The violation of the temple would have effects on the dismissal of the Argive fleet. The quarrel was caused by Athena herself: While Agamemnon wished to remain to appease Athena, Menelaus pushed to leave as soon as possible as the Achaeans were eager to leave. Most of the Argives who didn't waited had easy returns, but Ajax died in a storm at the rocks called Capherides.[1]

Like this? Let us know!
Retrieved from "https://marvel.fandom.com/wiki/Ajax_the_Lesser_(Earth-616)?oldid=5873579"
Community content is available under CC-BY-SA unless otherwise noted.