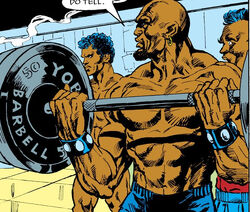 Conan contacted Ajujo to offer him a position in his own gang, knowing his strength and spirit. The black giant initially refused, but eventually acknowledged Conan's prowess and became his right hand. He died when he was shot by the police in the South Bronx, while Conan was battling Captain America.[1]

Like this? Let us know!
Retrieved from "https://marvel.fandom.com/wiki/Ajujo_(Earth-84243)?oldid=5213779"
Community content is available under CC-BY-SA unless otherwise noted.