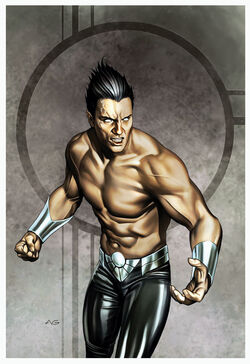 Alaris was an Inhuman with super-strength, fast reflexes, and bullet-proof skin. He was part of the delegation of Inhumans sent to Earth to study at a human college. He was friendly and naive, coming across as a foreign exchange student in an average college setting. His genial attempts to assimilate American and Earth culture made Alaris quite charming. He was genuinely having fun, unaware that he was being taken advantage of and lacking understanding of people's reactions to him and of how his behaviour affected them. He genuinely enjoyed his time among humans and acclimated himself the most among them.[2] During his time on Earth he became romantically interested in his fellow Inhuman Tonaja but she turned him down and asked that they become friends instead as she was already romantically involved with Dewoz back on Attilan.[3]

Alaris was part of a strike-force put together by Medusa and Gorgon in order to free the cocooned Inhumans from the terrorist organization A.I.M..[4]

Alaris is an Inhuman, granted with enhanced abilities, and powered by Terrigenesis. His powers include:

Like this? Let us know!
Retrieved from "https://marvel.fandom.com/wiki/Alaris_(Earth-616)?oldid=4859492"
Community content is available under CC-BY-SA unless otherwise noted.