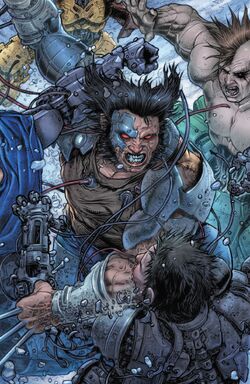 Albert, an android doppelganger of Wolverine, was built by Donald Pierce in the Reavers' secret underground base. Pierce created the Wolverine android in order lead the real Wolverine to a trap where he would be killed by Elsie-Dee. Elsie-Dee had the appearance of a little girl, but was in fact an android bomb created by Pierce to assassinate Wolverine. Unfortunately for Pierce, one of his Reavers accidentally let Elsie become superhumanly smart during her construction, leaving her self-aware enough to cherish her own existence.[citation needed]

Unable to override her primary directive, Elsie-Dee still tried to find a way around her own self-destruct protocols. She upgraded her partner's strength and intelligence as well after they were released in California to draw Wolverine's attention. She hoped if the Wolverine android was smart enough and tough enough to kill Wolverine, she wouldn't have to explode to do it. Once he was as smart as Elsie, the little android named her partner "Albert" after Albert Einstein. The newly self-aware Albert realized he would miss Elsie-Dee if she were gone, and consciously chose to help her kill Wolverine without dying herself.[2]

Albert still wasn't strong enough to beat Logan when they fought, however, and so Elsie-Dee was forced to carry out her programming. When Logan selflessly faced injury in a burning building to save her, though, Elsie refused to let him die and consciously fought to override her detonation sequence. Meanwhile, Albert made his way to an electronics store and hacked into the NSA's super-computers to crack Pierce's programming. He managed to crunch the numbers and made an override code for Elsie, which he transmitted to her even while getting shot down by the police for raiding the store.[3]

After rebuilding himself in the police evidence locker, Albert stole a stealth bomber and reconnected with Elsie-Dee.[4]

Later, while searching for Wolverine to tell him he was ill, Albert and Elsie-Dee met up with a creature known as a Hunter in Darkness, which they called "Puppy." Later, they were seen with the supernatural assassin Bloodscream.[5]

One day, Albert went on a rampage in the forests of Saskatchewan, Canada. He killed a group of forest rangers, which attracted the attention of Daredevil, Nur, Misty Knight, and Cypher as they were searching for the real Wolverine after his body went missing. He first ambushed Cypher and nearly killed him after slitting his throat. As he fought Daredevil, Nur, and Misty, he ranted that Elsie-Dee was missing and asked where she was. The heroes were able to take Albert down by striking a weak spot in his armor located on his back.[6]

In the wake of increased oppression suffered by artificial life forms across America by the hand of the government, a counter-movement emerged fighting for equal rights and robo-liberation. During this conflict, Albert joined the A.I. Army, a consolidation of this counter-movement dedicated to fighting for their cause, often through terroristic means.[7]

Albert later went to Madripoor to confront his creator Donald Pierce, believing he knew where his missing partner Elsie-Dee was. He learned Pierce's location from Wolverine's friend Tyger Tyger after helping her take out assassins that mistook him for Wolverine. Albert confronted Pierce and learned that Elsie-Dee had come to him to remove the self-destruct program in her. Instead, Pierce had taken her apart and sold different pieces to criminal gangs all over Madripoor. So, Albert went across Madripoor recovering Elsie-Dee's parts and putting her back together again. However, Albert's actions had antagonized Pierce and the Reavers, as well the criminal gangs who had formerly owned Elsie-Dee's parts, and they all vowed to take him down.[8]

Albert and Elsie-Dee fought through two gangs of criminals before being confronted by the Yakuza, led by the crimeboss Kimura. After fighting off Kimura's henchmen, Kimura declared that he wanted to fight the androids by himself to avenge Yakuza honor. A fight was avoided when Elsie-Dee told Kimura that she erased his bookkeeping data she had in her memory. No longer needing to fight the androids, Kimura offered the androids safe passage to Macao but only if Albert agreed to lose one of his fingers as a form of penance. Albert agreed, and Kimura shipped the androids in a box to Macao, allowing them to bypass Pierce and his men who had staked out the Madripoor International Airport to destroy them.[9]

Albert's capabilities were based around Wolverine, thus he possesses:

Like this? Let us know!
Retrieved from "https://marvel.fandom.com/wiki/Albert_(Earth-616)?oldid=6118791"
Community content is available under CC-BY-SA unless otherwise noted.