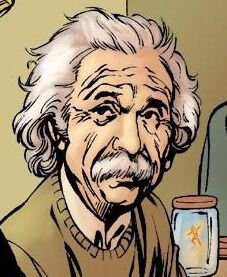 Albert Einstein was a German scientist with a Reed Richards-level intelligence[citation needed] he was considered one of the greatest minds in human history.[1] He developed the relativity theory at 26 and then worked as a teacher of theoretic physics in the University of Zurich, the German University at Prague and the Prussian Academy of Sciences.[2]

It was revealed the Albert like many other young geniuses was guided and developed with the help of an alien presence on Earth.[3]

In the 1950's, Adam Destine brought his son Vincent to meet with Albert when the young boy disappeared in time. He brought a along a shrunken Human Torch who he pulled from the future. He told Albert it was a "Fire-Sprite".[4]

Einstein's time was captured by a Chronovore and sent to Dodge City on 1871 (8 years before his own birth). He understood he had time-travelled against his will, and struggled to find an explanation, especially when different anachronisms began to appear in the area.There, he met western heroes Kid Colt, Two-Gun Kid, Rawhide Kid and the Phantom Rider. They decided that "Uncle Al" was the only person who could discover something, and decided to help him. They provided Einstein with advanced alien technology from other displaced people, the alien Krozzar, and protected his hut to help him pinpoint the cause.[2]

Unfortunately, a desperado gang led by ruffian "Faro" John Hobart thought that the heroes where protecting valuable food or something, and attacked them in different raids. They were eventually defeated by the western heroes and other heroes from the 20th century. Einstein theorized that time could not be destroyed, only displaced. Some kind of "time magnet" was attracting people, and he tried to develop a machine to pinpoint it. Unfortunately, he lacked an energy source for it, and he required two days of non-stop work to finish it. Meanwhile, the heroes had less than two days to stop the Krozzar from blowing up all the area. Einstein eventually found a mountain as the source of the anomaly. He went there with the time-travelling heroes and found a chronovore. They were all "swallowed" by it, and had to travel among the historical events inside of it, trying to reach its brain. Unfortunately, movement without time was impossible, and they had to find an alternate means of reaching the brain.[2]

They eventually found the brain of the creature, which was being tortured by Doctor Doom. The heroes defeated Doom and his minions, and Einstein had a chance to examine Doom's machine. It was wired to the monster's brain. Einstein managed to use it so that the monster could regurgitate all of their timeline, although the chronovore was killed in the process. The last problem was making the chronovore vomit history in the correct order. After succeeding at this task, Albert Einstein was returned to his time.[2]

Einstein reputation grew to legendary status, his name becoming synonymous with genius.[5] Many young scientist like to keep a poster of Einstein on their walls.[6][7][8] Reed Richards named his childhood dog "Einstein".[citation needed]

An Albert Einstein robot met the New Warriors in the 21st century.[9]

Like this? Let us know!
Retrieved from "https://marvel.fandom.com/wiki/Albert_Einstein_(Earth-616)?oldid=5394224"
Community content is available under CC-BY-SA unless otherwise noted.