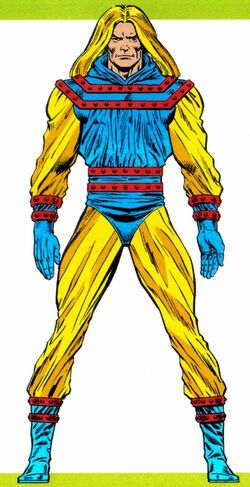 Albert Gaines was a worker at a nuclear power plant when he was accidentally exposed to radioactive waste products and gained superhuman powers. Calling himself Nuke, he embarked on a heroic career as a crime fighter and was invited to join the Squadron Supreme sometime prior to their clash with the Overmind as their sixth recruit.[1]

After serving for many months, Gaines learned that his parents were dying of radiation poisoning due to his proximity to them. He turned to the Squadron's resident genius, Tom Thumb, to cure cancer and save his parents. Tom couldn't come up with a solution, though, and Nuke fled the Squadron in rage.[2]

Later Gilbert and Florence Gaines died and Albert was driven mad with grief, launching a berserk rampage. He was opposed by Doctor Spectrum, who was forced to trap Gaines within a force-field, within which Gaines suffocated and died.[3]

Nuke had the superhuman power to transform nuclear energy for personal use, such as flying by nuclear propulsion and projecting bursts of destructive energy.

Nuke had the normal human strength of a man of his age, height, and build who engaged in moderate regular exercise.

Like this? Let us know!
Retrieved from "https://marvel.fandom.com/wiki/Albert_Gaines_(Earth-712)?oldid=5415287"
Community content is available under CC-BY-SA unless otherwise noted.