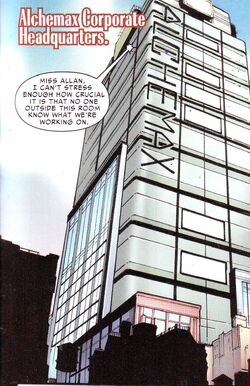 The Alchemax is an American multinational chemical corporation headquartered at Alchemax Tower, New York. Alchemax provides chemical, plastic, and agricultural products and services to consumer markets that include food, transportation, health and medicine, personal care. The President and CEO of Alchemax is industrialist Liz Allan.

The company was created after Liz Allan's company "Allan Chemical" was merged with her son's Normie's stocks from Oscorp and the last remaining properties of Horizon Lab after its destruction, establishing it under the new name of "Alchemax".[3]

It was later revealed that Norman Osborn, under the guise of "Mason Banks," created the corporation in order to leave a strong empire for his grandson and establish an empire for the Osborn legacy. Following his defeat, Osborn was able to escape custody due to Liz "accidentally" activating a Spider-Sense jammer, prompting Spider-Man to keep tabs on them.[2]

A division of Alchemax under the leadership of Robert Chandler called Alchemax Genetics created ten clones of Laura Kinney, though they were considered failures as they did not inherit her healing factor or claws. Four of the girls later escaped with the help of Kimura, and began targeting Alchemax and its employees using equipment she provided. Kimura wanted revenge against Alchemax Genetics for stealing technology she considered her property, while the girls sought vengeance for the treatment they endured at their creators' hands. Chandler requested Wolverine's assistance in stopping the escapees, but when confronted, three of the girls — Gabby, Bellonna, and Zelda — claimed that they had nothing to do with the destruction of the installation where they were being kept and were merely trying to escape. However before they could reveal anything further, Laura and her "sisters" were attacked by Captain Mooney, Alchemax Genetics' head of security, who attempted to kill the girls alongside Taskmaster.

How much Alchemax's corporate headquarters knew about Chandler's activities is unknown. However Chandler expressed significant concern to Mooney about what might happen once his superiors learned the truth about their project after repeated, and very public, failures to recapture the clones.

Alchemax Genetics was ultimately destroyed by Wolverine and The Sisters, with Laura tipping off Maria Hill and S.H.I.E.L.D. of their activities and location.[5]

Like this? Let us know!
Retrieved from "https://marvel.fandom.com/wiki/Alchemax_(Earth-616)?oldid=6494147"
Community content is available under CC-BY-SA unless otherwise noted.