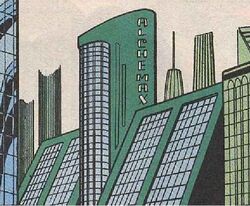 The Alchemax Headquarters was the corporation's main executive building. Board of Directors Exective Officer Anderthorp Henton was in charge of the building,[1] acting as the C.E.O. of Alchemax.[2]

When the real C.E.O. of Alchemax, Avatarr, was revealed to be the one who was pulling the strings behind the corporation's activities,[3] he set up a Board of Directors' meeting during which he had Henton killed, filling his role as Eco Central supervisor with his fellow director Fearmaster.[4][5]

The fate of this building after Henton's death is unknown, since Avatarr has been later shown operating from his office at the Alchemax Military Department Tower.[6]

After Avatarr's death at the hands of the new President Doom,[7] the C.E.O.'s seat was offered by Doom to Alchemax's Vice President Tyler Stone.[8] However, Stone was shot by his ex-lover Conchata O'Hara,[9] and went in a comatose state.[10] Stone's biological son, Miguel O'Hara, replaced him as the Director of Research & Development Division.[9]

After having regained consciousness, Stone tried to regain control of Alchemax from Miguel, who had meanwhile decided to keep his position, leading Alchemax to better use its resourches. When Tyler arrived at his son's office, Miguel had doctors identifying him as mentally disable, and ordered security to take him outside the building, taking over his position as C.E.O. of Alchemax.[11]

When Miguel became the C.E.O., the Research & Development Building became the corporation's headquarters.[12]

Like this? Let us know!
Retrieved from "https://marvel.fandom.com/wiki/Alchemax_Headquarters?oldid=5512261"
Community content is available under CC-BY-SA unless otherwise noted.