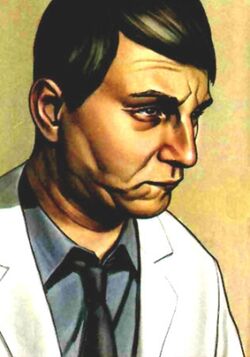 It's only a matter of time before the thief is discovered and interrogated.

Dr. Aldrich Killian was a brilliant scientist working for the FuturePharm Corporation in Austin, Texas alongside Dr. Maya Hansen. Together they developed Extremis, an attempt to create a new super soldier. The Extremis was a Techno-Organic Virus that completely rewrites the body's genetic code. It replaced entire organs, making them more efficient. The virus also gave the body a sort of healing factor. The original Extremis granted super human strength, speed, endurance, reflexes and the ability to project electricity and breathe fire.[1]

He stole a sample and sold it to a terrorist group. The group (based in a slaughterhouse in Bastrop, Texas) injected a willing test subject named Mallen. A bizarre physical change overtook him; his horrified compatriots flew the room but locked him in it. The injected man's body was covered completely in a bizarre layer of scar tissue.[1]

Days later at Futurepharm Corporation offices, Dr. Aldrich Killian committed suicide at his computer. His suicide note informed co-worker Maya Hansen that he had stolen the Extremis serum for an undisclosed purpose.[1]

Like this? Let us know!
Retrieved from "https://marvel.fandom.com/wiki/Aldrich_Killian_(Earth-616)?oldid=5123413"
Community content is available under CC-BY-SA unless otherwise noted.