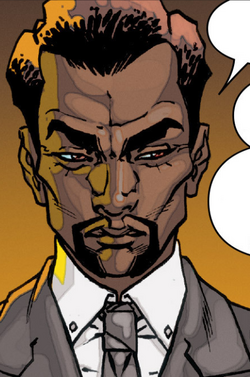 Dr. Aldus Kluge was Genosha's Genegineer during the time when a mutant virus began to plague the people of the island. After the Press Gang stopped the food shortage riot in Hammer Bay they made their way back to the Genoshan government's citadel.

There Kluge was called upon to find out where he was as far as developing a cure, but he said that it was a hard task to complete as the virus spontaneously modifies it's genetic code and it was always in a state of constant evolution, much like the mutants that it effects.

When Baron Grey refused to lift the quarantine on the island, Havok devised plan to travel to X-Topia so they could kidnap the healer Triage and Rogue. Kluge was put on standby until they came back with the captives. During this time he was working on the resurrection of Cameron Hodge.[1]

After getting his hands on Triage, Kluge was performing some diagnostics on him while he was sedated. Kluge revealed that he was using him in order to revive Hodge by combining his healing abilities along with the Transmode Virus. This would allow Kluge to have an ally to help eradicate all mutants.[2]

Once Hodge awoke, Kluge introduced himself as the current genegineer and told him that he was revived by the help from a mutant healer who was brought there to cure a plague that was created by Kluge himself. Having a DNA sample from the deceased Warlock and an exo-skeleton made from adamantium allowed Kluge to fully reassemble Hodge so he could finish what he started.

Kluge was interrupted when Press Gang members Wolfsbane and Bulletproof busted through the glass ceiling of his laboratory revealing to them what his true intentions were. However Bulletproof fell unto Hodge, becoming infected with the virus to which genetically altered his body. Not knowing what happened to him, he snapped out of control and grabbed Dr. Kluge with an elongated tendril and stabbed him with it resulting in the genegineer's death.[3]

Like this? Let us know!
Retrieved from "https://marvel.fandom.com/wiki/Aldus_Kluge_(Earth-24201)?oldid=5667288"
Community content is available under CC-BY-SA unless otherwise noted.