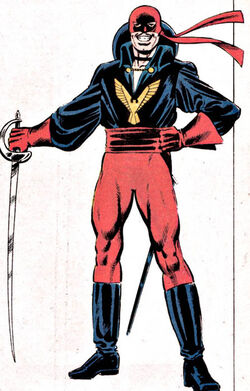 In America, Montoya appeared as Águila as a champion for the poor of New York City, stopping criminals such as drug dealers and slum lords. It is probable that the money he confiscated from these criminals was redistributed to the poor. Since his activities were outside the law, Águila was wanted by the police and on several occasions, he found himself in conflict with and sometimes working with Power Man and Iron Fist. El Aguila, who believes the two Heroes for Hire to be involved in shady business following their last encounter.When Power Man and Iron Fist arrive in Canada, they are taken into Jeryn's private office where he tells the two that he believes that some of the women on his staff may be stealing the various assets that that are kept that Arie. When El Aguila arrives to attack the Aerie, he ultimately ends up teaming up with Power Man and Iron Fist and exposing a number of Jeryn's support staff who are responsible. After the thieves are defeated, El Aguila is thanked for his help, Aguila departs from the Arie as an ally of the Heroes for Hire, but not before stealing a kiss from Jennie.[1]

Águila once found himself in conflict with the Avenger Hawkeye while investigating Cross Technological Enterprises, when Hawkeye was serving as their head of security.

Águila was supposedly depowered on M-Day event,[2] but still was considered a 'Potential Recruit' for the Initiative.[3]

He has trained in the art of swordsmanship and is by any standard a master swordsman.

El Águila carries a double-edged steel sword, 36 inches long, weighing 2 1/2 pounds. It has a hand guard that curves around the knuckles.

Like this? Let us know!
Retrieved from "https://marvel.fandom.com/wiki/Alejandro_Montoya_(Earth-616)?oldid=6105475"
Community content is available under CC-BY-SA unless otherwise noted.