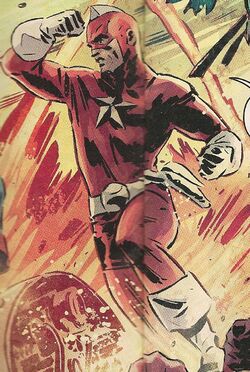 Aleksey Lebedev was the first Red Guardian, created as a Soviet counterpart to Captain America during World War II. He came to the authorities' attention by his heroic actions following an industrial accident.[4] He had lost most of his family to the Nazis invasion of Russia.[5]

He was sent into Berlin in an attempt to secure the strong box of Adolf Hitler. He failed and had to report his failure to Stalin.[5] There he met Captain America, Spirit of '76 and the Patriot.

Red Guardian fought alongside the (second Captain America) and the Prince Namor at the Potsdam Conference in July, 1945.[4]

When the Cold War began, he opposed the All-Winners Squad and the third Captain America.[3]

Aleksey reportedly was killed during Soviet purges in the 1950s, for his opposition to the experiments that would lead to Alexi Shostakov becoming the next Red Guardian.[1]

Red Guardian is a normal human being who engages in intense regular exercise and training.

Like this? Let us know!
Retrieved from "https://marvel.fandom.com/wiki/Aleksey_Lebedev_(Earth-616)?oldid=6056891"
Community content is available under CC-BY-SA unless otherwise noted.