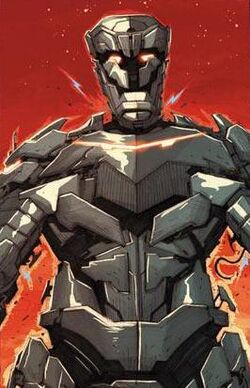 Aleph was a member of the Builders' Alephs, a species created to purge the species which would unfit the Builders' vision of the universe.

This Aleph brought two eggs with itself as part of its mission, one of a Gardener and the other one an Abyss, Ex Nihilo and his sister Abyss, respectively. This Aleph taught them to transform any species they encountered in their path into perfect creatures for the Builders.[1]

They finally arrived on Mars in order to restore the red planet and the Earth. Aleph calculated that Ex Nihilo's intervention was being "world-razing". Which would force him to destroy the Earth if Ex Nihilo failed to polish this planet. After Nihilo shot an Origin Bomb at Earth to accelerate the evolution of mankind, he affected almost two million people. The Avengers scrambled a response team, which was captured by Nihilo, with only a broken Captain America sent back to Earth to serve as an example.[2]

The cavalry arrived as soon as Nihilo's first human was fully developed. He and his allies fought the Avengers until they noticed the presence of, newly an Avenger, Captain Universe, recognizing her as a power beyond them they must obey. Abyss and Nihilo agreed to stop their crossing to transform and/or destroy "imperfect" worlds from Captain Universe's order. But Aleph denied, because he didn't recognized Captain Universe as his deity. When he tried to kill her, Captain Universe vaporized him with just a single touch.[3]

Like this? Let us know!
Retrieved from "https://marvel.fandom.com/wiki/Aleph_(Garden)_(Earth-616)?oldid=5458907"
Community content is available under CC-BY-SA unless otherwise noted.