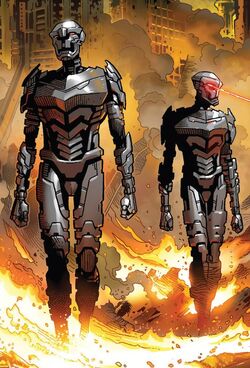 The Alephs were a species of robotic creatures created by the Builders, their mission is to purge the species which would be unfit in their vision of the universe. An Aleph carries the eggs of a Gardener and an Abyss, whose tasks when they grow up is to create new life.[1]

When a Gardener raised by an Aleph called Ex Nihilo tried to make Earth sentient, his own creations cataloged the planet as a "failure", and sent a signal to the Builders,[2][3] who started heading to this planet in order to destroy it, conquering and destroying numerous planets in the process.[4]

A resistance conformed by the Galactic Council and the Avengers managed to oppose the Builders, although they still had the odds in their favor. When Captain Universe arrived to the Builder Command Vessel and started defeating the Builders, the alien entities ordered their Alephs to auto-destroy along with whatever they could take with themselves as the tide of the battle had been turned.[5]

Alephs from other realities continued to exist re-purposed by the Builders as they searched for the Source of the Incursions.[6][7][8]

Energy Projection: They can fire potent energy beams from their eyes and hands.

Like this? Let us know!
Retrieved from "https://marvel.fandom.com/wiki/Alephs?oldid=6496753"
Community content is available under CC-BY-SA unless otherwise noted.