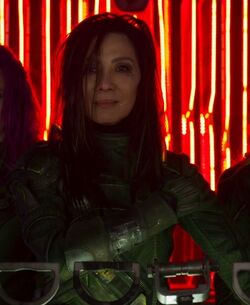 Aleta Ogord was a member of Stakar's original Ravager crew. Like most of the crew, Aleta went on to captain her own Ravager clan. She along with the other Ravager captains attended her old crewmate Yondu Udonta's funeral after he sacrificed himself to protect the galaxy from Ego, even though the Ravager community shunned him for betraying the Ravager code. Stakar reunited Aleta with the rest of their old crew in Yondu's memory.[1]

Like this? Let us know!
Retrieved from "https://marvel.fandom.com/wiki/Aleta_Ogord_(Earth-199999)?oldid=6485683"
Community content is available under CC-BY-SA unless otherwise noted.