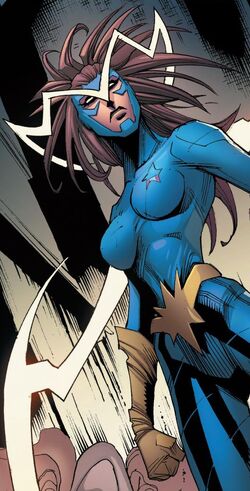 Your attitude is reminiscent of another man I knew... I showed my ex-husband no mercy, nor shall you receive any!

Aleta Ogord was born in the 31st century on the planet Arcturus IV. Aleta was raised to be aggressive and ruthless by her father. Stakar, her adopted brother, was the more intellectual of the pair. Although she initially resented him, the two eventually fell in love and married. The two traveled to the Forbidden City on Arcturus and discovered a statue of the powerful Hawk God. Aleta accidentally triggered a mechanism in the statue. Her body was turned into energy and merged with Stakar, granting him incredible power.[3]

With this bonding only one of them could exist at any time while the other was locked in Limbo until they swapped places. Stakar remained corporeal for most of the time and took the name Starhawk. Aleta's father Ogord decided to use Starhawk as a weapon, but Aleta and Stakar did not want to be used in such a way. The two left for space and Ogord vowed revenge.[3]

Eventually the two grew lonely in space. Secretly returning to Arcturus they petitioned the Hawk God to temporarily separate them so that they might have children to which the Hawk God agreed. Stakar and Aleta had triplets: Tara, Sita and John. The two were then re-merged, with Aleta remaining to take care of the children.[3]

However things did not remain well. Stakar, wanting to return to space, forcibly took control as Starhawk. The children were secreted away in a home where they could have instant communication with Starhawk. Aleta began to resent Starhawk for taking them away from her children and keeping her locked in Limbo. During his travels through space, Starhawk met and joined the interstellar freedom fighters known as Guardians of the Galaxy.[4] During the brief periods Aleta was in control she also acted as a member.[5] Aleta's father Ogord later found and abducted his grandchildren, using them in a plot to kill Starhawk. Although the plot failed thanks to the Guardians, the children aged rapidly and died. Aleta never forgave her husband for their loss.[6]

On a later mission Aleta and Starhawk separated.[7] Finally free from her now-hated husband, Aleta divorced him and began a romantic relationship with Vance Astro. Vance reciprocated her feelings and he eventually proposed to Aleta and she agreed to marry him.[8]

Over time the separation from Aleta began to affect Stakar. During her battle with Malevolence he forcibly reabsorbed his ex-wife and fled the team. Although it was Stakar's male form, Aleta's mind was active as well. Another side effect of the forced merger was that Starhawk's physical form was now completely black with stars shining from his body. Aleta could also physically harm her husband by causing him intense pain. The duo could also swap places and while swapped Stakar could physically harm his wife as well.[citation needed]

Unable to live like this the two battled for the right to be Starhawk and Aleta was the victor. She returned Stakar to his infant form to begin his life anew (as he had done many times before) and took his place as Starkhawk. She also forgave him for all his past transgressions.[citation needed]

Aleta rejoined the Guardians, who were attacking the Badoon, and battled a Captain Universe powered Badoon. She drove off the uni-force and saved her teammates and reunited with her love. However all was not well. As the avatar for the Hawkgod Aleta found herself growing colder and losing her emotions. When the Guardians went to check on Centauri-IV they found the planet altered. While the Guardians were in the past a change to the timeline was made and the Centauri and Badoon were now merged. Yondu further explained that Starhawk had informed them that the Guardians were coming. Aleta denied this but then the group realized that Yondu did not know Aleta was now the Hawkgod's avatar and watched as Stakar returned and confronted his wife.[citation needed]

While the former husband and wife quarreled the Hawk God watched as his avatars bickered like school children. Finally having enough, he brought the two to him and fused the two at the hands, forcing them to work together. Eventually the Hawk God separated them and Aleta opted to withdraw her petition to be Starhawk as she did not like how emotionless she became while being the Hawk God's avatar. She remained with the Guardians of the Galaxy from then on.[citation needed]

Aleta and Stakar eventually became able to separate again with no ill effects, and she resumed her relationship with Vance. However, without Stakar, she seems to be becoming more cold and ruthless like the other Reavers.[9]

When the Brotherhood of the Badoon began decimating entire civilizations, the Guardians tried to stop them, but upon realizing that temporal anomaly was causing the timeline to reset, they called the Galactic Council to discuss this anomaly, but were ambushed by the Brotherhood.[1]

Like other Arcturans, Aleta possesses superhuman strength, stamina, durability, agility and reflexes, a long lifespan, and immunity to most diseases.

Aleta possesses the ability to turn light into a solidified state. She can use this ability to create objects to use as weapons, energy blasts, shields and flying discs enabling her to fly.

She is also able to phase through solid matter by aligning her own molecules in the corresponding pattern of molecules of the object she is attempting to pass through.

As Starhawk, she could safely travel through space at lightspeed. She could use cosmic energy for several effects including creating energy blasts, shields and healing injuries. She also possessed cosmic awareness while merged.

50 tons (normal); not known when merged.

Aleta's burning hatred of Stakar (Also known as the Guardian Starhawk) has been used against her in the past, as has her trusting nature.

Like this? Let us know!
Retrieved from "https://marvel.fandom.com/wiki/Aleta_Ogord_(Earth-691)?oldid=5715386"
Community content is available under CC-BY-SA unless otherwise noted.