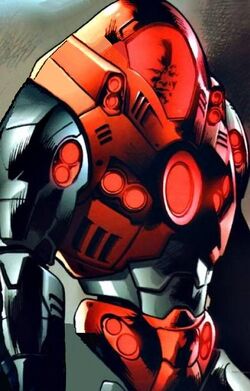 Alex Su, known as the Crimson Dynamo, was a member of the Liberators. His armor was based on similar technology to Tony Stark's Iron-Tech. He was unable to exit his armor, having been fused inside. He could supposedly use it to control up to 50 giant-sized drone versions (which were revealed to be piloted independently).

When the invasion of America was turning in favor of their enemies, Su decided to order his drones to randomly kill every innocent bystander on sight; however, he was apparently killed when Tony Stark vaporized him while piloting the massive Iron Man Six airborne weapons platform.[1]

None. Instead, he relies on his armor.

Able to command fifty of his Crimson Dynamo drones.

Built-in guns and other armaments

Like this? Let us know!
Retrieved from "https://marvel.fandom.com/wiki/Alex_Su_(Earth-1610)?oldid=5074931"
Community content is available under CC-BY-SA unless otherwise noted.