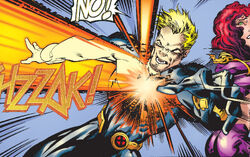 On Earth-1298 Alex Summers' parents and brother Scott were kidnapped by the Shi'ar. While back on Earth, Alex was discovered by Charles Xavier and eventually grow up to be the X-Men's leader, Havok. He fell in love with Jean Grey, the X-Man called Ariel.[1]

During a time Jean was believed dead, Havok encountered Madelyne Pryor on a trip to Alaska, where he was inspecting the house he had recently inherited from his deceased grandmother. Madelyne was created by Sinister, in the hope that she would breed with Alex, creating the perfect mutant offspring. Struck by the uncanny physical similarity between Pryor and his late girlfriend the two became friends, which grew into a romance when she returned with him to X-Factor. Although she had no powers at the time, Maddie was quickly accepted into their "family". She and Havok were soon married, and she gave birth to their son, Scotty Summers.[1]

During the Inferno crisis, Scotty was abducted by the demons S'ym and N'Astirh. X-Factor, now called The Six, fought alongside Magneto's X-Men to defeat the demons, but it appears that Madelyne was key to the mutants' success. There is evidence to indicate that she struck a deal with the demons that saved her son and the planet.[1]

Havok seemingly died during a fight with Sentinels. However, he was instead thrown into unconsciousness while the temporally displaced Earth-616 Havok took over his body.[1]

During the final battle with the Goblin Queen, Havok returned to Earth-616, while the evil Earth-1298 Havok went with him. He lay dormant when Charles Xavier freed Alex's consciousness. Biding his time, he finally re-emerged after Xavier Institute student Wolf Cub wounded Havok. Luckily, the Exiles (Mimic, Magik, Sasquatch (Heather Hudson), Nocturne, Morph, and Sunfire) were sent by the Timebroker to fight off the evil Alex until the Earth-616 version came back. The Timebroker personally eliminated the evil Alex's consciousness.[2]

Seemingly those of Alexander Summers (Earth-616)#Powers.

Like this? Let us know!
Retrieved from "https://marvel.fandom.com/wiki/Alexander_Summers_(Earth-1298)?oldid=5414252"
Community content is available under CC-BY-SA unless otherwise noted.