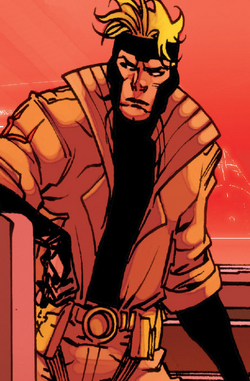 Havok stayed behind in Genosha with Wolfsbane after the defeat of the cyborg Cameron Hodge by the X-Men. He helped Chief Magistrate Anderson rebuild the country and protect the mutant population. After years of peace, the island's residents became fearful about a mutant extinction plague outbreak so they started a riot over a food shortage. Havok and his team, the Press Gang were called in to put an end to the resistance. As the fight became worse, Havok had Mystique impersonate the deceased Professor X, so that they could see that he was still alive and that his speech would calm down the rioters, which ended in success.

Havok was present as his teammate and girlfriend Wolfsbane pleaded with God-Emperor Doom and then Baron Grey about Genosha's plight dealing with the mutant plague but neither would uplift the quarantine that was placed on the island. Not happy with the decision, Havok devised a plan to invade X-Topia Province's X-City to kidnap the mutant healer Triage.

The Press Gang made it to the province as the X-Men were engaged in a game of baseball. They all jumped out of the jet with Havok assisting Bulletproof in taking down Rockslide by firing his plasma blasts at him.[1]

Havok concentrated himself against the bigger threats while their extraction plan entered phase two. He purposely shot a plasma blast at Anole knowing that Shadowcat would push him out of the way while phased.

She got hurt and was teleported to hospital for treatment with a disguised Mystique in place so they could kidnap Triage. Havok had Karma possess some members of the X-Men to help them with their escape. Their Quinjet was destroyed with Anderson in it, leaving him with the only option of using the temporal powers of the possessed Eva Bell to transport the Press Gang and their captives back to Genosha.[2]

Back in Hammer Bay, Havok made quick work with having Triage and Rogue heal the sick residents. But Phoenix arrived with a select group of X-Men to attack them in order to rescue their teammates. Havok took on his niece as Wolfsbane brought Triage down to the lower levels to keep him self. [3]

Amidst the battle, Havok caught wind that the mutant plague was created by Dr. Kluge and that he also resurrected the deceased Cameron Hodge. Having his people pinned down, Havok had his niece probe Wolfsbane's mind to see that he was speaking the truth.

Splitting up both teams Havok joined in the final fight with Hodge, but with having the Transmode Virus and an Adamantium exo-skeleton Hodge seemed to be unstoppable. A final attempt was made by Havok. He along with Rahne and Bombshell took the Blackbird and flew it straight into Hodge as Alex and Tabitha used their combined powers to create a huge explosion killing Hodge once more.[4]

Like this? Let us know!
Retrieved from "https://marvel.fandom.com/wiki/Alexander_Summers_(Earth-24201)?oldid=5667294"
Community content is available under CC-BY-SA unless otherwise noted.