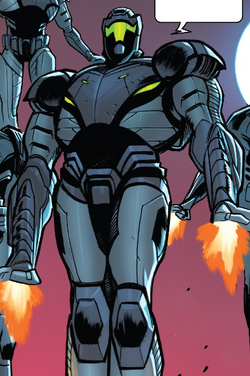 —Iron Man about her alias[src]

Alex Draguno (Russian: Александра Draguno) trained to be an exoskeleton pilot in the Black Academy, an elite school founded to fight American super-soldiers. She got the highest ratings ever, and she created new techniques for piloting suits. She ended working in an exoskeleton for a Russian nuclear power plant. She was approached by Arthur, who offered to make her his "Lancelot" in his technological brotherhood called The Circle. She became one of the Circle's best members and trained their new soldiers.

During an auction run by A.I.M., the Circle bought part of the replicated Extremis technology, creating new and better exoskeletons for their own purposes. After they noticed Iron Man was searching for the Extremis which A.I.M. stole, Arthur proposed Stark a wager: if Stark defeated the Circle's Extremis-enhanced pilots, he would be free to retrieve the Extremis.

When Lancelot fought him, Stark lost on purpose only to get the chance to destroy their Extremis sample, which was being protected by a light-permeable force field, using a potent U.V. laser, thus the Circle lost all the Extremis they had left and were unable to continue producing new technologies.

Even though the Circle lost the Extremis, Lancelot felt that she won, by demonstrating her superiority against Iron Man as a pilot.[1]

When the powerful material Phlogistone was found in the Moon, the Circle was sent to Tranquility Gulch, the human colony from which the Phlogistone was studied, as representatives of Symkaria.[2] They later helped Iron Man attack the embassy of the country of their common enemy, Doctor Doom, in an attempt to prevent any Phlogistone from reaching Doom's hands.[3]

Later Lancelot was with her fellow Circle members who threatened to arrest X-Force for the theft of stolen goods in Aniana. They ended up in a battle against Cannonball and Shatterstar when the two refused.[4]

Very skilled in piloting the Knight-Suit, to the point of only using its thrusters and "lance" of anti-repulsor power in her martial arts style, rather than as weapons of their own.

Like this? Let us know!
Retrieved from "https://marvel.fandom.com/wiki/Alexandra_Draguno_(Earth-616)?oldid=4923802"
Community content is available under CC-BY-SA unless otherwise noted.