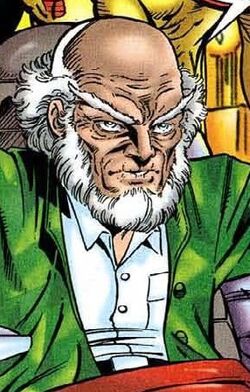 Ganger was a scientist who worked alongside Phillip Masters (Puppet Master) and Jacob Reiss who became disillusioned with his work. Ganger hoped to bring an age of enlightenment, discovery and utopic peace to the Earth through science but instead saw it used for greater and greater weapons. Ganger would go on to lose his wife and later be struck with multiple sclerosis. When Ganger witnessed the Silver Surfer's first arrival on Earth it was a religious experience for him he began to view the Surfer as a messianic figure. Ganger surrounded himself with scientists and philosophers who believed as he did and who also came to worship the Surfer.[1]

Ganger's granddaughter Sorrentino was one of the disciples and worked as his right hand alongside an army of biotechnic clones, the Gangers, to locate the Surfer after he returned to Earth.[2] Ganger revealed his worship of the Surfer to a kidnapped Phillip Masters shortly before said kidnapping lured the Surfer in. Ganger and his granddaughter revealed their worship of the Surfer to him who declined their wish to act as their messiah. Ganger then had his Gangers attack the Surfer who was in a delicate emotional state and reacted with rage and violence.[1] After the Surfer accidentally injured Masters and healed him, leading Masters to remark he had 'seen the light' and would change his ways, Ganger and his people became even more certain that the Surfer was a messiah, believing that the Surfer had raised Masters from the dead.[3]

The Surfer was still reluctant to be seen as any kind of messiah but Alicia Masters encouraged him to try and help the world, using his abilities the Surfer bathed the Earth in quantum energies which allowed every person alive to feel absolute peace, acceptance and love. Ganger and his people then recovered the Surfer after he fell into the ocean exhausted and welcomed Masters into their fold as he sought to atone for his sins. After the Surfer left them, Ganger revealed to Masters that their 'attack' on the Surfer had in fact been a cover to siphon some of the Power Cosmic from the Surfer, Ganger planned to have Masters help him create their own messiah now that the Surfer had refused them.[3] Ganger then had Masters use his Psychic Clay to mold a statue[4] which was then brought to life with the Surfers stolen energies and became the Cosmic Messiah.[5] Ganger then had the Messiah programmed with the history of humanity and brought Alicia Masters to behold him and nurture the humanity within him as she done with the Surfer years before. Instead the Cosmic Messiah reduced him to energy alongside of the rest of the inhabitants of Satori before being reconstituted.[6]

Like this? Let us know!
Retrieved from "https://marvel.fandom.com/wiki/Alexei_Ganger_(Earth-616)?oldid=5103119"
Community content is available under CC-BY-SA unless otherwise noted.