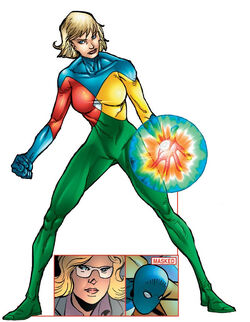 Alice Nugent was a former lab assistant of Henry Pym.[2]

When Alice Nugent originally worked for Hank Pym he had no clue she owned the company that was employing both of them. She had wanted to learn Pym's research methods. Alice Nugent founded Nugent Technologies which had earned a good reputation as leaders in the telecommunications field.[3]

She received her Power Prism from Martha Gomes. As an agent of the Grandmaster's Squadron Sinister, Alice wanted to take over the world in order to make it a better place.[4]

Busiek reintroducing Alice Nugent in Avengers V3 #20 may have been set up for the eventual Crimson Cowl reveal as we learn that Alice owns her own telecommunications company and had originally misrepresented herself to Pym to pass herself off as his lab assistant.

Like this? Let us know!
Retrieved from "https://marvel.fandom.com/wiki/Alice_Nugent_(Earth-616)?oldid=5345495"
Community content is available under CC-BY-SA unless otherwise noted.