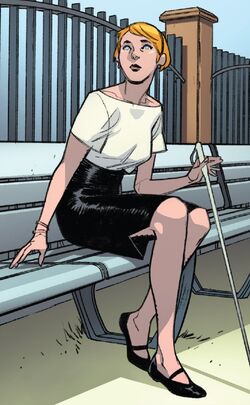 His face feels strong & powerful! And yet, I can sense a gentleness to him--there is something tragic--something sensitive!

Alicia's father Jacob was killed when his partner Phillip Masters, the Puppet Master, decided to destroy the laboratory where they worked together. Without his knowledge, Alicia and her mother, Marcia, accompanied Jacob to the laboratory. In the explosion, Alicia was blinded, and Marcia died when she inhaled toxic gas. Feeling remorseful, Philip adopted the girl and swore at all costs to restore her vision, without success.

Alicia moved with her adopted father to Manhattan where she studied at a special school for the blind. Soon, Alicia discovered her passion for sculpture. Unfortunately, during that time Phillip became completely mentally unbalanced and tried to use a special clay for his own benefit. When the Fantastic Four got involved, Alicia's very sharp senses detected the invisible Susan Storm and this allowed Phillip Masters to capture the Invisible Girl. Then he forced Alicia to pose as the Invisible Girl in order to infiltrate the team, however she rebelled against him and instead became a friend of the Fantastic Four.[4] Alicia felt especially interested in the Thing, not because of his appearance but his personality, and she became his girlfriend.[5]

The Fantastic Four once travelled back in time to ancient Egypt to retrieve a rare herb that had the ability to cure blindness. Although the heroes were able to find the herb in the possession of Rama Tut and managed to retrieve it, they were unable to bring the remedy back with them to the present because Doctor Doom's time platform could not transport objects with radioactive properties.[6]

Alicia proved her value to the Fantastic Four during the FF's first encounter with the Frightful Four. The Wizard, Medusa, Sandman and Paste-Pot Pete defeated the Thing, Mr. Fantastic and the Invisible Girl. Fortunately for the three of them, Alicia came along and found an unconscious Sue Storm lying on the floor. Alicia took Sue's flare gun and signaled Johnny Storm. The Human Torch saw her signal for help and as a result his three partners and Alicia were saved.[7]

When the Silver Surfer, herald of Galactus, first came to Earth he came across Alicia by chance. She sensed his inner nobility and pleaded with him to spare humanity. His long-dormant emotions were stirred by Alicia's beauty and spirit. The Surfer turned on Galactus and helped fight him off.[8] Galactus punished the Surfer by trapping him on Earth, erecting an energy barrier around the planet that was uniquely attuned to the Surfer.[9] The Surfer became a global wanderer, trying to adjust to his new home and understand its people. A short time later, he returned to see Alicia, only to find himself in a pointless skirmish with a jealous Thing who misunderstood Alicia's interest in the Surfer.[10]

In a Skrull plot to infiltrate the Fantastic Four, Alicia was taken away by Paibok while another Skrull named Lyja impersonated her back on Earth. When encountering the Fantastic Four for the first time, Lyja was shocked to find the She-Hulk had taken the place of the Thing, who her plan hinged on. The Human Torch reluctantly told her that Ben had chosen to stay on Battleworld, thinking that Alicia was heart-broken over the loss of her love. Lyja’s plans were in shambles, but she reacted quickly and turned to Johnny, who she intended to get close to as a confidant. However, Lyja fell in love with Johnny, and the two were later married in a private ceremony that the Puppet Master nearly broke up until he realized how happy his supposed daughter seemed to be. After Lyja's ruse was discovered, the real Alicia Masters was rescued from suspended animation by the Fantastic Four, unaware that any time had passed.

Alicia Masters and Norrin Radd begin a romantic relationship when Norrin returned to Earth to regain his losing humanity. Like she had done once before, Norrin hoped seeing Alicia again would rekindle his emotions and connection to humanity [11]. Their subsequent adventures would lead to the development of romantic feelings between Alicia and Norrin. For a short time while in space Alicia was given a special super powered 'interstellar bodysuit' which allowed her to survive the harshness of space as well as see energy signatures [12]. When Galactus' new herald, Red Shift targeted Earth to sate Galactus' hunger, Alicia and the Silver Surfer fly into space to stop the World Devourer [13]. Much to the horror of Alicia, Norrin once again accepts Galactus' demand for a herald as the price for sparing Earth [14]. After Galactus' defeat and death at the hands of Earth's superheroes and the Shi'ar Empire, Alicia asked Norrin to return to Earth with her but he refused.[15]. He broke up with her so she could return to her life in New York and continue pursuing her art while he mourned alone for the death and betrayal of his former master while also investigating Galactus' final warning.

During this time the Fantastic Four were seemingly killed defeating Onslaught, Alicia acted as caretaker to Mister Fantastic and the Invisible Woman's young son, Franklin for a time.[16]

Following the Skrull Invasion Alicia led a support group along with Leonard Samson for Initiative members who were readjusting to their lives after they had been abducted and replaced by Skrulls.[17]

When Parker Industries purchased the Baxter Building for its New York City office, Dr. Peter Parker commissioned a statue of the Fantastic Four, along with Valeria and Franklin, to be sculpted by Alicia and placed in the lobby for all to see, since at the time they were all believed dead, with the exception of The Thing and the Human Torch.[18] While struggling with the loss of his family, Ben reignited his romance with Alicia. He eventually decided to move on, and decided to propose to her. She accepted before Ben could even finish the formalities. The ring was made out of a fragment of a magical gem Ben had been gifted by an ally of the Fantastic Four during their travels.[19]

The remaining members of the Fantastic Four returned to Earth shortly after Ben had proposed to Alicia. In light of this turn of events, Alicia suggested Ben to move the wedding forward,[20] and they married days later with a small ceremony in Benson, Arizona, where Ben's uncles lived.[1]

Sculpting: Alicia is one of the leading Neo-Realist sculptors in the world today. Her realistic-yet-romantic portrayals of the world’s superhumans have earned her household name status and great popularity.[21][5][22]

Blindness: Alicia Masters was blinded when at age 15. However, she has adapted and learnt to deal with this very well, for instance gaining her sculpting skills and apparently memorizing most of Manhattan, being able to get around the city as easily as an out-of-town visitor can.[23][21][5]

Billy Club / Cane: A special white cane which can be split into a double baton for self-defense. It was a birthday gift from Matt Murdock.[24]

Like this? Let us know!
Retrieved from "https://marvel.fandom.com/wiki/Alicia_Masters_(Earth-616)?oldid=6438690"
Community content is available under CC-BY-SA unless otherwise noted.