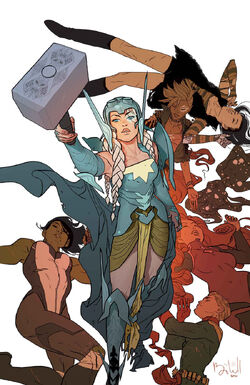 Not much is known about Alison Blaire, including her domain of origin, but at some point in time, she became a member of the Thor Corps, a force in service to God Emperor Doom composed of multiple men and women dedicated to preserving peace across Battleworld.

After the apparent death of Antimatter tore holes in the barrier between realities,[2] Thor followed the Countess, a shape-shifting sorceress with the power of warping reality itself, into the Exo-Space, allowing both to avoid the eventual destruction of Battleworld, though she encountered Terrigen Mist therein.[3]

After what seemed like an eternity, the pair arrived in Astoria, Oregon, of Earth-616 and was seen by the newly formed A-Force of that reality fighting Countess (then, in the form of a dragon).[4] Alison befriended the members of this team and she learned that her counterpart was experiencing Terrigen poisoning and was dying.[4]

After a while in this Universe, Dazzler Thor also contracts M-Pox, and, when Countess is defeated, Dazzler Thor finally succumbs to the effects of the Terrigen Mists and vanishes, leaving her hammer behind.[5]

Like this? Let us know!
Retrieved from "https://marvel.fandom.com/wiki/Alison_Blaire_(Earth-15513)?oldid=5718827"
Community content is available under CC-BY-SA unless otherwise noted.