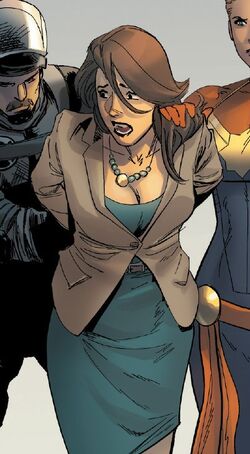 Alison Green is a finance banker who works in high-end corporate mortgages. She was arrested in Chicago by Captain Marvel and S.H.I.E.L.D. on suspicion of being a deep-cover Hydra agent involved in a plot to destroy the financial institutions of the United States by detonating a black hole bomb on the floor of the New York Stock Exchange, with no more evidence than a vision from the Inhuman precog Ulysses Cain.[1]

After being arrested, no device nor any other evidence of involvement was found, with Ms. Green herself appearing to be completely baffled by the accusations. She was teleported out of the interrogation room in the Triskelion by Nightcrawler on behalf of Tony Stark and several other heroes who opposed the use of Cain's abilities.[2]

After this incident, Alison wanted revenge and thus hired Spot to kidnap Carol Danvers' best friend Jessica Jones. Offering to pay Jones in exchange for dirt on the superhuman community, Alison left Jones in an abandoned warehouse just across the street from her office.[3]

Jessica later agreed to hand over Captain Marvel to Green.[4] Unbeknownst to Alison, Captain Marvel had been on the trail of her anti-superhero network, and was working with Jessica to root her out. On Alison's behalf, Jessica called Carol to the safe house where they convened. Captain Marvel was seemingly neutralized with a power dampener Alison had bought from rogue A.I.M. scientists, and Spot beat her up. Alison proceeded to reveal her plan to cause an incident similar to the Stamford tragedy triggered by the New Warriors to rip the superhero community apart, by targeting the Champions. To Alison's surprise, Jessica hadn't sold out Captain Marvel. The conversation had been wiretapped, and the power dampener was a dummy, with the A.I.M. scientists having been undercover S.H.I.E.L.D. agents. Allison was subsequently arrested.[5]

Like this? Let us know!
Retrieved from "https://marvel.fandom.com/wiki/Alison_Green_(Earth-616)?oldid=6190659"
Community content is available under CC-BY-SA unless otherwise noted.