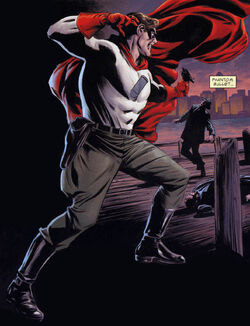 Allan Lewis was a reporter for the Daily Bulletin who, although wealthy, still worked as a reporter on minor stories. He was very apathetic about his job, until one day he was assigned to cover a case involving unseen murderers that left seven fingered hand prints. When he flubbed the assignment when the killers got away, Lewis was assigned to cover a "crack pot" scientist and his invention. The scientist had invented a new type of gun that could fire bullets made of ice that would melt after being shot leaving no bullet traces. Leaving the invention in Lewis' care, the scientist was murdered by the same crook. Inspired to catch the crooks, Allan came up with the costumed identity of the Phantom Bullet. Tracking down the killer he learned that it was explorer Alveroz Monez who brought members of the African Bird-Men to America to help him commit his crimes. The Phantom Bullet slayed Monez and his minions.[1]

The career of the Phantom Bullet would prove to be a short and fatal one. Fighting corruption on the docks, the Phantom Bullet became a thorn in the side of an operation that involved the smuggling of weapons and people, including Nazi spies. Eventually, the Phantom Bullet angered the wrong person and was murdered. His body was dumped in an alleyway and found by police. The discovery of the Phantom Bullet's body was also witnessed by the costumed hero known as the Angel. The Angel attended the funeral of Allan Lewis and vowed to catch his killers.[2] Ultimately, the Angel avenged the Phantom Bullet's death by helping expose a conspiracy orchestrated by Nazi Germany, rebel Atlanteans led by U-Man, and Imperial Japan to attack the United States on December 7th 1941.[3]

The Phantom Bullet had no superpowers but he was very agile and athletic.[4]

He was excellent shooter, skilled fighter and quick thinker with a keen investigative mind. He was also a capable makeup artist.[4]

The Phantom Bullet took his namesake from his special gun which fired "ice bullets" which would melt away, leaving nothing behind.[1]

Like this? Let us know!
Retrieved from "https://marvel.fandom.com/wiki/Allan_Lewis_(Earth-616)?oldid=4016808"
Community content is available under CC-BY-SA unless otherwise noted.