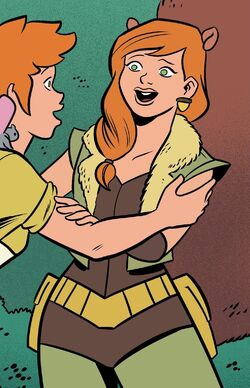 I think we've been trying to save the wrong species, Doreen. Humans have had more than their fair share of close calls, near misses, and do-overs. I think it's time we give squirrels a chance, Doreen. You and I, we're not Human Girl. We never were. We've always been Squirrel Girl. And I think it's time we start acting like it.

Allene Green is a clone (or "mad science duplicate"[2]) of Squirrel Girl created when she was inadvertently thrown into a Duplication Chamber created by the High Evolutionary.

Initially, she aided Squirrel Girl in her fight against crime and even founded the Squirrel Avengers Initiative to make the world a better place. However, after the untimely death of Chompsky, Allene became disenchanted with humanity. Without Doreen's moral compass, Allene chose to use her powers to rid the Earth of humans (and humanoids) and make squirrels the dominant species. Although she nearly succeeded, she was eventually thwarted by Squirrel Girl, Tippy-Toe, and the heroes of the Marvel Universe. As part of a compromise, Allene and her duplicate squirrel army were sent to the Negative Zone to explore, battle villains, and establish Squirreltopia 5000.[1]

Those of the Doreen Green of Earth-616.

Those of the Doreen Green of Earth-616

Like this? Let us know!
Retrieved from "https://marvel.fandom.com/wiki/Allene_Green_(Earth-616)?oldid=5378692"
Community content is available under CC-BY-SA unless otherwise noted.