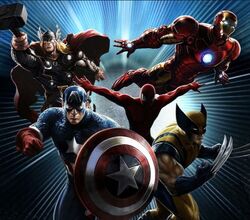 After a mysterious Pulse hit the Earth, it affected all technology worldwide, left strange energy signatures, and traces of an unknown material. After this unknown material was researched by S.H.I.E.L.D., and being called "Isotope-8", it was discovered it was the source of a form of energy that, uncontrolled can be lethal, but worked in the good way could bring the one who has it an unimaginable power.

Nick Fury told an agent of S.H.I.E.L.D. to make a team with the most powerful superheroes on Earth to collect all the Iso-8 before villains could get their hands on it, for that, the supervillains made their own alliance a Syndicate led by Doctor Doom.

The Alliance had worked on different missions not related with the Iso-8, such as Mephisto's arrival on Earth.

After the Syndicate was revealed to be a facade for Doom's true plans, the Alliance had to face a new threat, the mysterious arrivals of alternate versions of numerous heroes and Agents from other universes in the events called Incursions.[1]

In order to better study the nature of the Incursions, the Alliance was relocated to the Savage Land.[2]

Retrieved from "https://marvel.fandom.com/wiki/Alliance_(Earth-12131)?oldid=6099557"
Community content is available under CC-BY-SA unless otherwise noted.