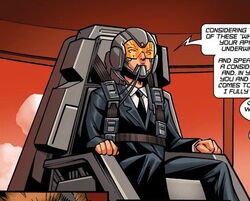 Allison Kemp is a former FBI and Interpol agent who ended up tetraplegic in an explosion caused by Deadpool in Chicago during one of her missions.[1]

For eleven years, while working for both the FBI and Interpol, Agent Kemp took the opportunity to embezzle over seven billion dollars from various slush funds belonging to nine different federal agencies. Evidence of this crime was uncovered by the FBI shortly after her retirement from service, but was immediately covered up by Deputy Director Nicholas Roach.[2]

Nine years after suffering her injuries Agent Kemp used a failed joint operation to capture Deadpool in New York as an excuse to retire from service and subsequently sought revenge on Deadpool, having devised a plot to revive two of his deadliest enemies, T-Ray and Slayback. However when Slayback failed to perform well in training simulations she allowed him to leave before engaging with Deadpool, which resulted in his death when he tried to make use of a booby-trapped parachute.

After defeating T-Ray, blowing him up on top of Kemp's customised airship, Deadpool pointed out to Kemp that there was no way he could've known that she had been an undercover officer nine years earlier and that she had chosen to put herself in the situation when she'd accepted the assignment. Although she at first appeared to have second thoughts about her revenge, this could have been more due to the intervention of the 'evil' Deadpool, who arrived just as she was about to sacrifice herself with a bomb in order to finally kill Deadpool once and for all.[2][3]

Tetraplegic, confined to a wheelchair

Billionaire (through embezzlement of federal agencies)

Like this? Let us know!
Retrieved from "https://marvel.fandom.com/wiki/Allison_Kemp_(Earth-616)?oldid=6476077"
Community content is available under CC-BY-SA unless otherwise noted.