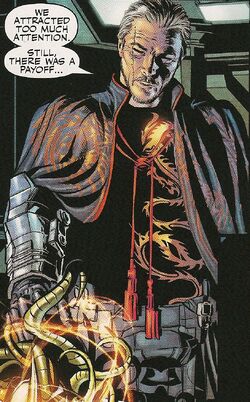 Aloysius Thorndrake was an American soldier who fought for the Confederacy during the American Civil War.[1]

In 1865, by the end of the war, Thorndrake led a group of Confederate soldiers on a chase to Union spy John Steele. They chased Steele through Texas until they all stumbled into a portal that connected Earth to Mars.[1][2] The portal was a pathway through a sidereality that would become known as the Vanishing Point, where an ancient entity known as the Abyss was trapped since the dawn of time.[1] Steele and the Confederate soldiers were tainted by said entity's touch and became his servants.[2]

At an unspecified point after that, the former Confederate soldiers created the subversive organization called the Shadow Council[2] and started working towards building an army to give the Abyss.[3] They established two bases of operations in each end of the pathway between Earth and Mars they had found, and used it until modern times.[1]

Many years later, Thorndrake lured John Steele into a trap and performed a ritual to rip reality open so the Abyss could take control of Steele's mind again, as he had somehow gotten free of it before World War I. Steele joined the Shadow Council soon afterwards.[2]

Thorndrake seemingly led the Shadow Council through many schemes during the Modern Age, including (but not limited to) the theft of the Crown of Tentacles,[4] and the resurrection of evil sorcerer Zheng Zu.[5][6] What became of Thorndrake after Max Fury (a Life-Model Decoy of Nick Fury) took over the Shadow Council[7] is unknown.

Like this? Let us know!
Retrieved from "https://marvel.fandom.com/wiki/Aloysius_Thorndrake_(Earth-616)?oldid=5269895"
Community content is available under CC-BY-SA unless otherwise noted.