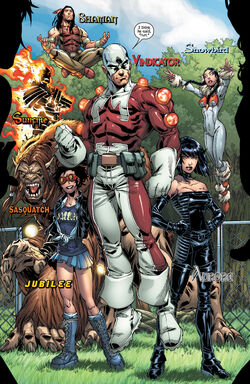 James "Logan" Howlett had a run in with Alpha Flight a while back. He betrayed them and left.[1]

Alpha Flight soon came to Xavier's School for Gifted Youngsters to take Jean-Paul Beaubier back to Department H. They easily overpower the X-Men and try to flee. But their escape is temporarily halted by Colossus, but is subdued.[1]

The X-Men later found out that Alpha Flight was using a mutant growth hormone known as Banshee.[1]

Up at Department H, 50 miles north of Montreal, Canada, Alpha Flight began injecting Northstar with Banshee. In Vindicator's eyes, they are saving the world. Alpha Flight is the first internationally sanctioned mutant team made powerful enough to take on any conceivable threats such as the Liberators, Brotherhood, and the Ultimates (as Vindicator sees it, they only serve America and are selfish and egotistical.) They are defeated by Colossus' group of X-Men.[2]

Like this? Let us know!
Retrieved from "https://marvel.fandom.com/wiki/Alpha_Flight_(Earth-1610)?oldid=5544220"
Community content is available under CC-BY-SA unless otherwise noted.