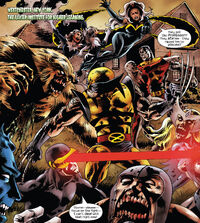 Base of Operations
Canada
Affiliations

Little is detailed about Alpha Flight’s history before the zombie plague arrived on Earth-2149, however it can be presumed that it followed much the same path as their counterpart of Earth-616 with the addition of Wolverine's longer membership. After becoming infected early in the Zombie Contagion crisis, Alpha Flight attack the X-Men and the School for Gifted Youngsters, killing Professor X.

Their rampage is cut short, however, when Magneto arrives and kills them.[1]

Retrieved from "https://marvel.fandom.com/wiki/Alpha_Flight_(Earth-2149)?oldid=5587777"
Community content is available under CC-BY-SA unless otherwise noted.