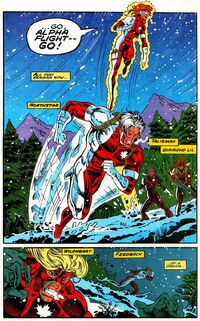 Base of Operations
New Montreal
Affiliations

After the passing of Canada's Super-Powers Registration Act, Alpha Flight tried to enforce the law peacefully, capturing unregistered super-powered individuals with restraint. They soon found themselves competing with the Hardliners who were willing to use extreme and violent means to end the "threat" of unregistered super-powered individuals. The Hardliners were a private army, backed by Joshua Lord. Lord also had supported the Registration Act's sponsor Robert Hagon. It soon became apparent that the Hardliners were capturing people with super-powers for experimentation.

After Hagon was elected Prime Minister, he enacted totalitarian control over the country over the next several years. He established a psi-web around the borders of the country. This invisible wall altered the perception of anyone leaving or entering Canada thus that no one outside of the country knew what was happening. The Hardliners began a wholesale slaughter of baseline humans while forcibly altering others into superhumans. The government cut ties with Alpha Flight and the Hardliners became the new enforcers of the law. Many of Alpha Flight's members were killed. It was soon revealed that Lord had been behind all of the changes.

Alpha Flight became a resistance movement, hiding in plain sight with Guardian operating from a space in New Montreal. With their team being killed or captured and hopes for success dwindling, Guardian decided that it was time to try and destroy the psi-web and get help from the United States. Guardian lead a strike team of surviving team members (Northstar, Talisman, Diamond Lil, Wildheart, and Feedback) to bring down the barrier. They were ambushed by the Hardliners and an invisible attacker. Members of the team were either killed or defeated, ensuring Lord's continued reign over Canada.[1]

Retrieved from "https://marvel.fandom.com/wiki/Alpha_Flight_(Earth-9418)?oldid=5544239"
Community content is available under CC-BY-SA unless otherwise noted.