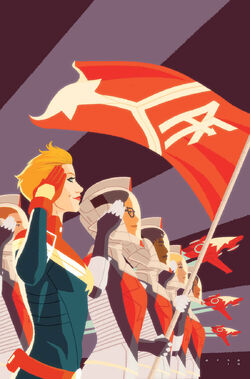 Stationed on a low-orbit space station in geosynchronous orbit above the Triskelion, the Alpha Flight Interstellar Defense and Diplomacy Initiative is Earth's first line of defense against extraterrestrial threats.[2]

In the dawn of Hydra's take-over of the United States, a Planetary Defense Shield was projected around the Earth to seal off the planet, leaving the Alpha Flight Space Station stuck between the impenetrable barrier and a relentless ongoing Chitauri invasion. In a last ditch effort to bring down the Shield, the A.F.S.S. was repurposed into the delivery system for countless explosive charges that were detonated in the surface of the Shield. The station was destroyed, but the Shield remained unscathed.[3]

Following the eventual destruction of the Shield and the end of Hydra's regime,[4] the staff of Alpha Flight found themselves grounded. Columbia University became the temporary home of Alpha Flight until the program could be reinstated.[5]

When Carol's lineage as a Kree became public, Carol decided it was best to step down as Commander of Alpha Flight and asked Brand to take over, which she reluctantly accepted.[6] Brand quickly became disgruntled with the handling of the program, namely by the reduced funding and secrecy of the governments behind it. After she quit, Henry Gyrich was appointed acting commander.[7]

Like this? Let us know!
Retrieved from "https://marvel.fandom.com/wiki/Alpha_Flight_(Space_Program)_(Earth-616)?oldid=6370696"
Community content is available under CC-BY-SA unless otherwise noted.