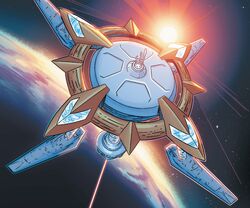 The Alpha Flight Low-Orbit Space Station was the headquarters of the space program of the same name,[2] located 250 kilometers above the Earth's surface, and constantly aligned with the Triskelion in New York City. Captain Marvel was the station Commander, and Abigail Brand was her second-in-command. [1]

It was destroyed after being evacuated and laden with Rocket Raccoon's Nullifier Bombs, then intentionally knocked out of orbit in a failed attempt to breach the Planetary Defense Shield,[3] but later rebuilt.[4]

In this reality "Z.V.S.S." or Zeta Flight Space Station is the base of Zeta Flight, a group of space pirates led by Corporal Carol Danvers.[5]

The entire station is composed of interlocking and interchangeable modules which can be detached to be replaced. Some include:

Like this? Let us know!
Retrieved from "https://marvel.fandom.com/wiki/Alpha_Flight_Low-Orbit_Space_Station?oldid=6190381"
Community content is available under CC-BY-SA unless otherwise noted.