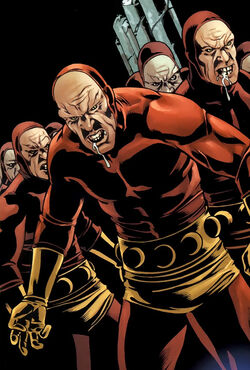 Alpha Primitives were created four thousand years ago by Inhuman geneticist Avadar, who had convinced the governing Genetic Council of the need of a race of sub-human servants to free their species Inhumans of any physical work. Thus, Avadar reasoned, all the species could search for knowledge and illumination.[4]

Some Alpha Primitives are actually Humans who have gone through Xerogenesis, this involved being exposed to the mists of the Xerogen Crystals empowered by the Slave Engine which was previously created by the Kree to use against their human enemies.[5]

In only a decade, the first five hundred Alpha Primitives were created. They began providing support to the city of Attilan in manufacturing, plumbing, drainage, food processing and more. They worked for eighteen hours a day, sleeping the other six, and having no need for culture or leisure.[4]

They understood human language in a similar way a six-year-old human child would. They had a life expectancy of forty-two years. Being non-sexual beings, their only chance for reproduction is through cloning. Due to this, all the Alpha Primitives are exactly equal.[4]

Since then, and for all the successive millennia, the Alpha Primitives have been working without any complaint. Occasionally, some unethical Inhumans have performed illegal experiments on them, specially on the field of genetics.[6]

Over time the Alpha Primitives began to rebel against the Inhumans.[7]

When the Inhuman Royal Family returned to their homeland, the reigning king, Maximus, learned of their arrival and unleashed the Alpha Primitives to combat them. Black Bolt flew directly into the Primitives sending them scattering. After a brief battle, Maximus entered the chamber and apologized for the effrontery. He claimed that the Alpha Primitives had escaped on their own. Realizing that he could not hope to win out over Black Bolt's courageousness, Maximus handed the crown of leadership over to his brother.[8]

Maximus performed a second experiment with Alpha Primitives: using a device to siphon psychic energy, he attempted to give life to a synthetic giant body. The psychic energy Maximus harnessed was formed from the guilt modern Inhumans felt for having a slave species. The giant humanoid would become Omega, the Ultimate Alpha. However, the Inhumans decided to end their "open war" against their own rebel workers, and Omega became lifeless again. Due to the "Omega Incident", the Inhumans decided to free the Alpha Primitives from service so that they could live as they wish on the sub-city under Attilan. Alpha Primitives were completely unfamiliar with leisure and freedom, and most of them continued with their previous task. Some Inhuman missionaries have gone to Alpha Primitive ghettos to instruct them.[10]

Recently, Maximus performed an experiment including three Alpha Primitives and a great amount of mutagenic Terrigen Mist. They become energy globes with a collective consciousness, known as the Trikon. The Trikon helped Maximus with his plan to get the crown of his brother, Black Bolt, and then in exiling the rest of the Royal Family of Inhumans. However, these beings were eventually defeated and banished to the Negative Zone.[11]

Before the wedding Crystal and Quicksilver the Alpha Primitives rebelled against the Inhumans. They captured Crystal and took her to what appeared to be a revived Omega, but he revealed his true form as Ultron-7, who wanted revenge against the Avengers.[12] He hoped to use them in his plans to destroy the Fantastic Four, Avengers and the Inhuman royal family. He failed and the Alpha Primitives were freed.[13]

Due to the fact that the Alpha Primitives can't live alone, the previous arrangement was reversed by the time Attilan moved to the Blue Area of the Moon.[14]

Currently the cloning of Alpha Primitives is strictly forbidden, which is reducing their number faster than many would have believed. As the Alpha Primitives are or have been a slave species for the Inhumans, the United Nations has repeatedly rejected the admission of Attilan to their member states.[15]

A number a Alpha Primitives were left in the Himalayas. struggling to get by just hunting, gathering and consuming. They encountered the Kree; Shatterstar in his search for the Inhumans.[1]

An Alpha Primitive RN-62 had been accidentally mutated by the Terrigen Mist. He used his newfound mutations to guard the mists and prevent the Inhumans from being further mutated.[16]

The Alpha Primitive; Alphan was a companion of the Inhuman Royal Family. When the Collector's Ship crashed in the Blue Area of the Moon, Alphan was along Quicksilver, Karnak and Timberius when they went to inspect the crash site, assuring that something was going to happen. As Thane Ector was going to kill Quicksilver, Alphan opposed him, and was the one whose native blood was spilled for the Brethren's tradition.[17]

Reyno an Alpha Primitive ran away from Attilan fearing growing up to be just another primitive. He ran with his friend and lover, Alecto.[19]

The remaining Alpha Primitives live quietly in their preserve where many of them many still mindlessly performing the jobs for which they were trained. At one point, Karnak and Gorgon were revealed and punished for advocating the continued use of the Primitives as slaves.[20]

The Unspoken later recovered by the Alpha Primitives, who cared for their fallen king. Realizing his mistake, the Unspoken plotted to return and reclaim his throne, cultivating the Xerogen Crystals, only for Attilan to rise into the sky. Cheated of his redemption and later learning of the Silent War between the Inhumans and United States of America, the Unspoken decided to change his plans and conquer Earth, unearthing the Slave Engine and planned on transforming all humans on the planet into Alpha Primitives.[21]

The history of the Alpha Primitives in Earth-9997 mirrors that of their Earth-616 counterparts.[23]

Alpha Primitives exist in Earth-17628. The Guardians of the Galaxy ended up on Attilan which was travelling through space. They were brought their by Lockjaw, but when they arrived they learned the Inhumans have come down with the "Terrigen Plague" that causes Terrigen Crystals to start growing from their body. The Alpha Primitives were also shown to be fully crystallized yet still alive. During this time, Maximus the Mad had apparently made a cure for the plague while also putting Black Bolt under his mind control. When Ronan the Accuser arrived, Maximus swore the Inhumans allegiance to the Kree. Ronan went back on their deal and decided to destroy Attilan. Upon confiscating the mind control helmet, Ronan then had Black Bolt order Lockjaw to teleport him and Star-Lord to the Terrigen Crystal caverns underneath to destroy Attilan from below. Upon Star-Lord using the Crypto Cube to undo the plague on the Inhumans and the Alpha Primitives, Black Bolt flew into space and used his voice to cripple Ronan's ship.[24]

The Alpha Primitives existed in Earth-80522, they were controlled by Tral along with the other Inhumans.[25]

In Earth-199999, the Primitives are members of the Watchdogs who were turned into Inhumans by Dr. Holden Radcliffe. Their creation is the result of a compound where it's ingredients consist of some Terrigen Crystals, blood from a Kree Reaper and Daisy Johnson, and Hive's own parasitic organisms.[26] Later, several S.H.I.E.L.D. agents became Primitives as well due to an explosive planted on confiscated items by R. Giyera and Hellfire on Hive's behalf.[27]

The Alpha Primitives are known as "Hoo-ma-noids" to Lockjaw.[2]

Slave species to the Inhumans

Users of Inhuman technology, but cannot reproduce it by themselves.

Obedient, but simple, can only deal with one order at a time.

A great amount of representatives who have no name.

Like this? Let us know!
Retrieved from "https://marvel.fandom.com/wiki/Alpha_Primitives?oldid=6393784"
Community content is available under CC-BY-SA unless otherwise noted.