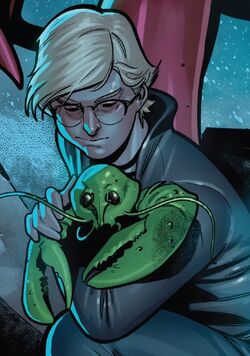 The young Alphonsus Lefszycic, known as Gomi, was the younger cousin of a researcher experimenting in bionics, Ramon Lipschitz. Ramon and his colleague, Tadashi Fujita, were brilliant college students with a research grant and faculties near Coney Island. Gomi was asked to be their lab assistant. The two scientists treated Gomi harshly (the name "Gomi" is a Japanese word meaning "junk") but Gomi idolized them and didn't notice.[1]

Their experiments, using cybernetics to enhance beings, resulted in the creation of augmented abilities, human-level intelligence and strength and the ability to project small illusions for communication in a pair of lobsters. Gomi named the lobsters Bill and Don. The two scientists were infatuated with the superheroine Marvel Girl, and were upset when she transformed into the Phoenix. Intending to create their own Marvel Girl by kidnapping a girl and implanting cybernetics in her, the scientists first experimented on Gomi himself, trying to bestow telekinetic abilities. They failed, however, in that Gomi's cybernetics simply produced a destructive and uncontrollable bolt of kinetic energy. The two scientists left, fearing an inspection on their studies.[1]

Gomi was visited by the Fallen Angels, a group of petty superpowered thieves led by the villain Vanisher. Gomi made friends and accompanied them on adventures, serving as the team's technical expert, but tragedy struck when Devil Dinosaur, who joined the team following a trip to Dinosaur World, accidentally stepped on Don the lobster, killing him.[2] Nonetheless, grief-stricken Gomi continued to serve on the Fallen Angels, accompanying them to the Coconut Grove, Ariel's home planet. The inhabitants of the Coconut Grove captured the Fallen Angels, intending to use them as experiments to continue their evolution, but the Angels worked together to defeat them. Gomi rejoined the Fallen Angels and he and Bill presumably remain with them to this day.[3]

Gomi's telekinesis can only be directed in front of him and in the form of a telekinetic blast. It is also capable only of creating a pillar of pure brute force and there is no fine motor control whatsoever.

Like this? Let us know!
Retrieved from "https://marvel.fandom.com/wiki/Alphonsus_Lefszycic_(Earth-616)?oldid=6105504"
Community content is available under CC-BY-SA unless otherwise noted.