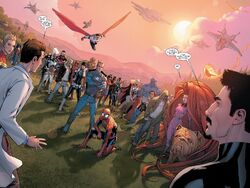 Alpine is a town on the western slopes of Rocky Mountains in Utah, just south of Salt Lake City.

After being cured of his gamma-irradiated mutation, Dr. Bruce Banner settled in Alpine under the assumed name of "Mr. Roberts" and lived in relative anonymity until Steve Rogers tasked Dr. Erik Selvig with helping him to manufacture a crisis of global proportions in order to prevent Ulysses Cain from perceiving their connection to Hydra.[1]

This triggered a vision from the Inhuman precog causing the various heroes to believe Dr. Banner would once again become the Hulk, prompting a massive contingent to travel to Alpine to confront Bruce.[2] During the resultant confrontation Clint Barton believe that Bruce was on the verge of transforming, and as a last resort shot Dr. Banner with a specialized arrow designed by Bruce himself to kill him should the Hulk ever return.[3][4][5][6]

While on assignment investigating another of Ulysses' vision in Tucson, Arizona, Jess Drew learned of Bruce's death from a television broadcast featuring Carol Danvers at the scene.[7] Jess traveled to Alpine, hoping to find anything that would help her make sense of what had happened, but finding nothing, she destroyed Banner's lab in a fit of rage.[8]

Like this? Let us know!
Retrieved from "https://marvel.fandom.com/wiki/Alpine_(Utah)?oldid=5853327"
Community content is available under CC-BY-SA unless otherwise noted.