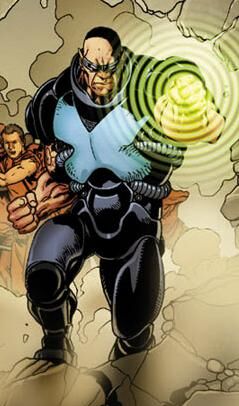 Alton Vibreaux was born in Baton Rouge, Louisiana. When he become a geologist, Alton was hired by Franklin Fortney to take some measurements of a deep trench right above the San Andreas Fault. When he fell into the Fault while testing an experimental machine, he was believed to have died. Instead, he received super-human seismic abilities, but was horribly disfigured. He searched for vengeance on Fortney, believing that it was his fault that the accident happened to him. Rhodey Rhodes, who had taken up the Iron Man mantle at that time, fought him and prevented him from killing Fortney.[1]

He battled Rhodes again, but was defeated this time by Tony Stark, who was wearing the original Iron Man armor.[2]

He tried to escape the Vault along with the Griffin, but was defeated again, this time by Falcon and Nomad.[3]

Some time later he caused a massive earthquake in Los Angeles, but was stopped by the Avengers West Coast, and later battled the original Iron Man again.[4]

Vibro was killed and resurrected by the Hand to join an assault against the S.H.I.E.L.D. Helicarrier, destroying it. After the assault, Vibro was gravely wounded by Wolverine as were most of the super-villains and heroes the Hand were using in the attack.[5]

Later, Mandarin upgraded and used him in his plan to finish Iron Man, as well as many other villains of the armored Avenger.[6]

Vibro's powers are dependent on pre-existing seismic instability, although it is possible the upgrades performed by Stane did away with this.

Like this? Let us know!
Retrieved from "https://marvel.fandom.com/wiki/Alton_Vibereaux_(Earth-616)?oldid=5511896"
Community content is available under CC-BY-SA unless otherwise noted.