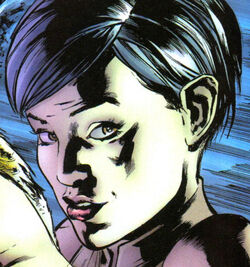 This isn't something you can trick or fight with your crazy friend. This isn't one of my Lara Croft adventures. We don't need the guy in the costume, Reed. We need you to be a scientist again.

Alyssa Moy was a child prodigy attending multiple universities throughout her life. It was during her studies at the University of Vienna she met fellow super-genius Reed Richards. The two even dated for a time before Alyssa broke it off, apparently reasoning at the time that they owed it to the world to spread their genes as widely as possible by marrying less intelligent people rather than 'confining' their gene pool. She later met and married Ted Castle.[4]

She remained in contact with Reed even after his marriage. Reed's son Franklin referred to her as 'Aunt Alyssa'.[3]

When Roma believed Franklin to be a threat to the multiverse, Alyssa and the Fantastic Four faced down the extradimensional threats of the Warwolves and other-dimensional bounty hunters Technet. They were transported to Otherworld to face the entire Captain Britain Corps.[6]

During a crisis where Alyssa attempted to enlist Reed's help in developing Nu-World, an Earth where the human race could retreat to when the environment of the current Earth becomes uninhabitable, she attempted to suggest to Reed that the two of them had married the wrong people, pointing out that neither of their spouses could really understand their work, but Reed simply replied that he stayed with Sue because he loved her, even if Alyssa found that hard to understand.[7]

The Alyssa of eight years in the future of Nu-World was now a floating brain in a robotic body still married to Ted Castle, helping to keep the planet from being destroyed. Sadly she was slain by her enemies.[5]

Super-Genius Intelligence: A skilled scientist with superb knowledge of multiple fields of science.[8]

Like this? Let us know!
Retrieved from "https://marvel.fandom.com/wiki/Alyssa_Moy_(Earth-616)?oldid=5801226"
Community content is available under CC-BY-SA unless otherwise noted.