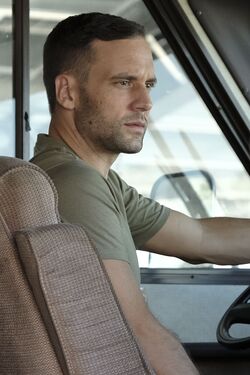 Well, I happen to appreciate your instinct to be thorough. I myself prefer a pint and a good nap, but then I'm the lazy type.

Lance Hunter is a former SAS operative known for operations in Sierra Leone and Basra; however, Hunter left the SAS for a woman.[5] He was married to Bobbi Morse, but their marriage ended badly and the two held bitter feelings about each other long after their divorce.[6] Some time later, he served among a group of mercenaries working for Izzy Hartley, employed by Director Phil Coulson of the newly reformed S.H.I.E.L.D. One of the (presumably many) missions Hartley's team worked on for Coulson included buying intelligence on a Level 10 asset, the Obelisk, from a former S.H.I.E.L.D. agent, but the mission went bad when they were attacked by the super powered Hydra assassin Carl Creel.

Later, Hartley's mercenaries and a team of S.H.I.E.L.D. agents infiltrated an army base to retrieve the Obelisk and keep it out of Hydra's hands. Hartley found the Obelisk, but was attacked by Creel soon after. She tried to use the Obelisk against him, but the moment she grabbed the device it painfully paralyzed her hand and prevented her from releasing it. Hunter and the rest of the squad were able to scare off Creel. They then came under fire from the army, but Hunter wanted to abort the mission to treat Hartley's hand. Although Coulson ordered them to continue the mission as planned, Hartley's team left anyway.

As they drove away, Hunter amputated Hartley's hand. Creel then appeared in the middle of the street, absorbed the asphalt in the road into his body, and caused the car to crash and flip over. Although Hunter survived the crash, Hartley and their driver were killed instantly. Hunter could only watch helplessly as Creel absorbed the metal of the car's hubcaps into his hand and make off with the Obelisk.[2]

Agent May soon came across the flipped car and found Hunter was the only one still alive. Hunter refused her help, and told her to continue after Creel. May left him a tool to cut himself out of the car and hurried off after Creel and the Obelisk. Hunter used the tool to get out of the car, but was almost immediately taken into military custody. The army left Hunter alone in the middle of a field, but a helicopter carrying Brigadier General Talbot soon picked him up. Talbot informed the mercenary that he wanted Coulson's location, and that he knew a senator with "deep pockets" who could give Hunter anything he wanted. Hunter agreed to give up Coulson in exchange for $2 million and a proper burial for Hartley. Talbot agreed to Hunter's terms and let him go. After losing his tail, Hunter returned to the Playground, where he told Coulson about his deal with Talbot and asked for his, Hartley's and Idaho's pay. Hunter later took part in the mission to prevent Creel from handing off the Obelisk to his Hydra superiors alongside May, Skye, and Trip, but Hunter betrayed the rest of the team so he could personally exact his revenge on Creel. Using Trip's sniper rifle, Hunter fired a shot at Creel's head at a short distance. Creel's contact ran away while Creel turned his body into metal to deflect the bullet. Creel chased Hunter into a nearby store and quickly overpowered him. Just as Creel was about to kill him, Coulson sneaked up behind him to place a device Fitz and Mack created to counter Creel's abilities. After the mission, Hunter watched the funeral Hartley was promised from a distance. Coulson then approached him, offering continue hiring his services, as S.H.I.E.L.D. is currently low on manpower.[5]

Hunter was later sent on a mission to Casablanca to retrieve Donnie Gill for S.H.I.E.L.D. alongside Skye and May. However, Hydra beat them to it, and Hunter found Gill speaking to a Jemma Simmons, a S.H.I.E.L.D. agent working undercover in the evil organization. Coulson ordered Hunter to open fire on them, and Hunter complied. However, May spotted Simmons and shot Hunter in the chest, though his body armor protected him. In the aftermath, May assured Hunter that they're even.[7]

When a painting was discovered with the runes Coulson had been carving on its back, Coulson and May infiltrated a fundraiser in South Beach in an attempt to take the painting for S.H.I.E.L.D. In order for them to get inside, however, Hunter would need to be able to distract the host's executive assistant. While the two of them were on their mission, Hunter and the rest of the team stayed behind on the Bus to provide aid. However, an impostor posing as Agent May planted a device on plane that infected its computers with a virus. The virus took control of the plane's computers, trapped everyone inside, and began a sequence that would cause the Bus to explode. As the rest of the team split up to repair the damage already done, Fitz and Hunter made their way to the core of the plane's computer systems to stop the spread of the virus. Fitz' brain damage hampered his motor skills, making him unable to do this on his own, so he needed to instruct Hunter on how to stop the plane. With Fitz' help, Hunter was able to stop the spread of the virus and save the plane. Later on, Hunter showed up with beers for himself, Fitz, and Mack. Fitz reluctantly accepted the beer, and, although he had no stories to tell about an ex, shared one about a time a girl rejected him.[8]

Like this? Let us know!
Retrieved from "https://marvel.fandom.com/wiki/Amadeus_Ravenclaw_Hunter_(Earth-199999)?oldid=6073782"
Community content is available under CC-BY-SA unless otherwise noted.