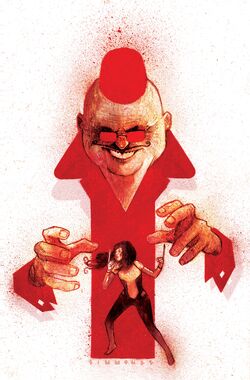 Amahl Farouk was the leader of the underground syndicate located in the "Thieves' Quarter" of Cairo, Egypt. He was a powerful mutant who also operated as a vessel for the Shadow King.[1]

While Charles Xavier was touring Cairo he had his pockets picked by Ororo, a girl "trained" by Farouk. After catching her, Xavier was suddenly stuck by a psi-bolt sent from the possessed Farouk and was knocked unconscious. He awoke and entered a nearby saloon owned by Amahl. Farouk greeted Xavier and then offered him a partnership. Xavier refused and challenged Farouk to a duel. After a brief battle, Xavier mentally defeated Farouk; after that, Xavier took his leave from Cairo.[1]

Despite his apparent death at Xavier's "hands", Farouk reappeared many years later as the Shadow King once more.[2]

Farouk later became a citizen of the mutant-only island of Krakoa.[3]

Like this? Let us know!
Retrieved from "https://marvel.fandom.com/wiki/Amahl_Farouk_(Earth-616)?oldid=6534292"
Community content is available under CC-BY-SA unless otherwise noted.