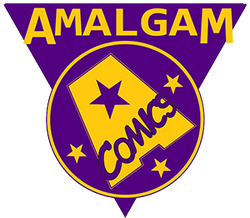 Amalgam Comics was a metafictional American comic book publisher, and part of a collaboration between Marvel Comics and DC Comics, in which the two comic book publishers merged their characters to create new ones (e.g. DC Comics' Batman and Marvel's Wolverine became the Amalgam character Dark Claw). These characters first appeared in a series of twelve comic books which were published in 1996, following the Marvel vs DC miniseries. A second set (of another twelve comic books) followed a year later.

The two comic universes came together when the incarnations of their respective universes (referred to as "the Brothers") became aware of each other after eons of slumber. To prevent the Brothers from destroying each other, characters from each universe battled to determine which universe would survive; several of the matches were determined by online voting. Axel Asher, a character created for the event (co-owned by Marvel and DC), served as a gatekeeper who became stuck traveling between both Universes.

When the fights concluded (including controversial victories by Wolverine and Storm over Lobo and Wonder Woman, respectively), neither universe was willing to go. To prevent total destruction, the Spectre and the Living Tribunal created a merged universe in which only Axel Asher and Doctor Strangefate knew the truth. The two struggled against each other to reverse or preserve the change.

Eventually, Axel Asher, now called Access, managed to separate the Brothers with the help of Amalgam's other heroes. Before the merger had taken place, he had planted pure 'shards' of the universes in Batman and Captain America, and once he discovered Dark Claw and Super Soldier, he used those shards to give the Spectre and the Tribunal the power to restore the universes. Batman, Captain America, and Access were thus able to make the Brothers realize that their conflict was pointless, and all returned to normal.

For two months, Marvel and DC published Amalgam Comics. During the publication of Amalgam Comics, the companies treated it as if it had always existed, giving it a fictional history stretching back to the Golden Age of Comics, as well as retcons and reboots, such as the Secret Crisis of the Infinity Hour (an amalgam of Secret Wars, Crisis on Infinite Earths, Infinity Gauntlet, and Zero Hour), including an Amalgam version of the cover of Crisis on Infinite Earths #7, with Super-Soldier holding his sidekick's body.

Here are a list of the various Amalgam one-shots printed in June 1997.