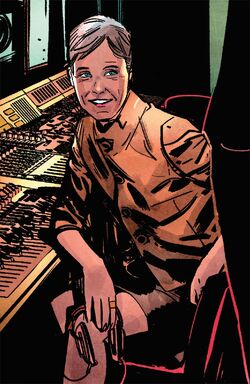 You said you wanted to offer me a recording contract... and now you want to make me an agent of S.H.I.E.L.D.... you do see how this all sounds crazytown?

Amanda Armstrong's father was a secret federal agent killed in the line of duty by A.I.M., though the public and Amanda were led to believe he had been murdered by a drug cartel. As a young adult, Amanda became a small-time musician under the stage name of Amanda Strong. One night after a performance, she was recruited into S.H.I.E.L.D. by Valentina Allegra de Fontaine, hoping to use her career as a cover for missions around the world.[1]

With the help of S.H.I.E.L.D.'s contacts, Amanda became a moderately successful vocalist for her own band. One night before travelling to Germany to deliver a package, she met the package's courier, a fellow S.H.I.E.L.D. agent named Jude. When she arrived to the Indra Club in Hamburg, Amanda's cover was blown, and she was attacked by an assassin. Jude saved her life, later admitting that he had followed her to Germany hoping to see her performance and ask her on a date afterwards.[1] The two agents were soon intercepted by undercover Hydra soldiers, but managed to escape from the hotel where Jude had taken Amanda regardless of the enemy presence.[2]

The incident at the Indra Club was covered up as an attack from an overzealous fan, allowing Amanda to remain operating undercover. She continued her career, and started dating Jude. After a two-year relationship, Amanda became pregnant and quit S.H.I.E.L.D.. A week before the baby was due, Jude tried to convince Amanda to disappear. He eventually revealed to have been working as a Hydra double-agent, showing his true nature as a selfish man who had no problem working for both sides and selling out fellow agents as long as it made profit. As Jude was trying to convince Amanda to accept Hydra's protection, she stabbed him in the neck with a pair of scissors.

Shocked by this development, Amanda decided she was going to give up the baby for adoption to a happy and safe family, requesting wherever he was sent to, the baby retained his birth name: Anthony. S.H.I.E.L.D. partially granted Amanda her wish,[2] and instead left the baby in an orphanage in Sofia, Bulgaria, the place where it was born.[3] After learning of Amanda's pregnancy, S.H.I.E.L.D. founder Howard Stark kept an eye on the baby and adopted him, taking the birth records in the process.[2]

Decades later, Amanda had become a London-based music producer. When Tony Stark investigated his true parentage, he found that Amanda could've been his true mother, and visited her at her record label.[3] Tony demonstrated his desire to get to know his mother, and the two hugged as Amanda called him, "My boy."[2] Before Amanda could bond with her son, Tony fell into a coma as a consequence of the second superhuman civil war. Tony's company, Stark Industries, fell to the hands of Amanda as established by his will. Amanda accepted the position to prevent the board of directors from taking control of the company, while Tony's A.I. assistant Friday ran the company behind the curtains.[4]

When Tony recovered from his injuries, he went into hiding for a brief time. After he meet up with Amanda to ensure her he was safe, she was approached by Jude.[5] He revealed her he had been resurrected by Hydra, and continued operating from behind the scenes for decades, only deciding to step into the light after learning what had become of their son. Jude coerced her into luring Tony to a trap. However, Tony's assistant Mary Jane Watson appeared and shot Jude in the shoulder, which prompted him to decloak a battalion of Hydra soldiers. A massive fight sparked after Ironheart and many other heroes arrived to confront Hydra. In the middle of the brawl, Jude got hold of MJ's gun and tried to shoot Amanda in the back. Before he could to so, he was knocked out by Iron Man.[6]

Amanda joined the upper management of her son's subsequent enterprise, the think tank called Stark Unlimited.[7] She hit it off with roboticist Andy Bhang, a music aficionado and a fan of hers,[8] and eventually got into a relationship with him. On the other hand, Amanda found it hard to connect with her son, and struggled to find common ground with him since Tony was constantly occupied; something Amanda worried Tony was doing on purpose to avoid her.

When Tony launched his next major project, a virtual landscape called the eScape, Amanda followed him into the digital world,[9] but she was abducted by the eScape's operating system, Motherboard,[10] who had been unwittingly damaged and left corrupted by a hacker attack from the villainous Controller.[11] Motherboard was a program made from the engrams of Tony's late adoptive mother Maria Stark,[12] and she contended that she was Tony's true mother.[13] To this end, Motherboard used her ability to warp eScape to her whim to enthrall Tony. When Amanda managed to snap Tony out of Motherboard's influence, she disclosed that since Tony had effectively rebuilt his body from scratch when he woke up from his coma, he was genetically a completely different being.[11] This revelation shook Tony and Amanda to their core. When they escaped from the eScape, Amanda decided to leave Tony's life since she felt she had no attachment to him. She tried to convince Andy to leave with her, but he refused in favor to continue working with Stark.[14]

Amanda returned to Camden Town and continued working on record labeling at North Star Studios. During the robot revolution, the automated audio equipment at North Star rebelled against Amada and her employees, and kept them hostage so that they could teach them music. They were eventually saved by Rescue, who came looking for Amanda after Tony was fatally injured at the hands of his brother Arno. Pepper wanted to obtain from Amanda a sample of her DNA, to then use it in combination with Jude's DNA and create a new body for Tony. Amanda initially refused, believing her plan to be heinous. Amanda and Pepper were attacked at the former's house by drones sent by Hydra, who had caught notice of Rescue's plan and wanted to disrupt any attempt at bringing Tony back. After destroying Hydra's drones, Pepper convinced Amanda to give her a lock of her hair.[15]

Like this? Let us know!
Retrieved from "https://marvel.fandom.com/wiki/Amanda_Armstrong_(Earth-616)?oldid=5579177"
Community content is available under CC-BY-SA unless otherwise noted.