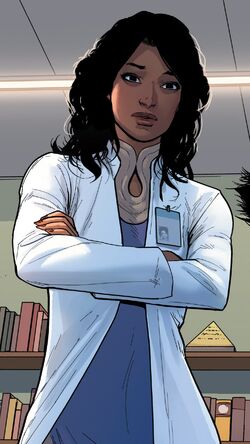 You know what everyone else should be doing. You say you want this big second chance in life. Do something that helps humanity that's as bold as the things you were doing were trying to destroy humanity!

Dr. Amara Perera is a brilliant biophysicist who was born and raised on the island of Sri Lanka. Amara had developed a cure for the mutant gene that theoretically prevented Mutants from receiving their abilities, but hadn't dared to create it due to the political and sociological aftermath that would surely occur if she did.[1]

She met Tony Stark at a conference in Dubai. Some time later, they had a date in New York City, where she explained her discovery to Stark, but didn't wanted to use it. The date was interrupted when Stark's A.I. assistant Friday notified him of the sighting of Madame Masque in Latveria.[1]

Following a life-threatening encounter with Madame Masque, Tony visited Amara in her laboratory and opened up to her, and they shared their first kiss.[2] They started dating shortly after,[3] but their relationship ended after Tony faked his own death to infiltrate a clan of bio-tech ninja in Japan. After that she returned to Sri Lanka and lived with Tharik Baas.

During Stark's absence, his newfound ally, the reformed Victor von Doom, began to pay attention to Amara,[4] and even set her up a laboratory in Cambridge University and kept her off the grid. When Tony eventually returned, he apologized to Amara and tried to reconnect with her, but she rejected him, feeling he had been cruel of letting her believe he had truly died.[5]

Following Tony's fall into a coma, Victor continued visiting Amara, despite her opposition, turning her into his reluctant confidante.[6][7][8] Amara's unwilling connection with Doom also caught the attention of S.H.I.E.L.D., who would barge into her place of work for questioning more than once,[6] which resulted in her being fired.[8] Amara's apartment was even destroyed when S.H.I.E.L.D. agent The Thing interrupted an encounter between she and Victor, which resulted in a fight.[9] Not long afterwards, Amara began feeling symptoms of pregnancy. Her friend, a physician named Keren, ran tests and shared with Amara that she was indeed pregnant.[10] It would later be mentioned by Doom that the child didn't survive to term.[11]

Genius Intelligence: Dr. Perera is a brilliant biophysicist whose work was respected by both Dr. Victor von Doom and Tony Stark. Her work allowed her to come up with a way to potentially neutralize the X-Gene,[1] and is currently working on a cure for Alzheimer's.[4]

Like this? Let us know!
Retrieved from "https://marvel.fandom.com/wiki/Amara_Perera_(Earth-616)?oldid=5718329"
Community content is available under CC-BY-SA unless otherwise noted.