If only Peter were here! He's the only one I can turn to... but, it's too late! Everything's too late... and Bennett is dead... because of Spider-Man!!

When Peter hears that Doctor Octopus is about to be released from prison, he goes to the warden to petition against his release. The warden tells Spider-Man that Octopus served his time and tells him to get out before he has him arrested. Knowing that Octopus will probably go back to a life of crime, Peter develops a Spider-Tracer device which will allow him to track Octopus wherever he goes. When he tags the car coming to pick up Octopus, Spider-Man is shocked to find Betty Brant driving. He also finds that she dropped a map to Philadelphia from the car when she picked up Octopus.

As it turns out, Betty's trouble involves her brother Bennett, who is the lawyer for crime boss Blackie Gaxton. He also owes Gaxton a large gambling debt. In order to clear this debt, Betty has agreed to help Bennett follow through with Gaxton's plan: Use Dr. Octopus to free him from prison.

When Peter travels to Philadelphia, he tracks down Betty and tells her how he feels. Meanwhile, Dr. Octopus frees Gaxton, and they take Betty and Bennett as hostages as they escape by boat. Spider-Man arrives to capture both, but during the altercation Spider-Man sprains his ankle and Bennett is shot by a bullet fired by Blackie that was meant for his sister.

Betty blames Spider-Man for her brother's death, and Spider-Man battles Dr. Octopus around the ship, but Octopus escapes. The police arrive and arrest Blackie and his gang. Later, having changed back to Peter Parker, he learns from Betty that she hopes to never see Spider-Man again, because she couldn't bear being reminded of her brother's death. This hampers Peter's plans of revealing his secret identity to her. 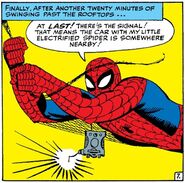 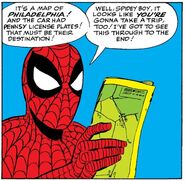 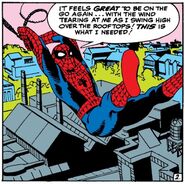 Events in this story occur behind the scenes, affecting the chronology of the following characters: