Reading over the newspaper, Wilbur Day laments that his career as the costumed criminal known as Stilt-Man has been an utter failure. He had hoped he would find fame and fortune when he stole the hydraulic stilts created by his employer Karl Klaxton to become Stilt-Man. However, instead, he was defeated at the hands of Daredevil. He recounts how a later encounter with Spider-Man led to the wall-crawlers defeat, but the Stilt-Man didn't stick around long enough to finish off the hero and was defeated once again by Daredevil. He recalls how the computer known as FAUST constructed an even more powerful suit of armor for him, but he was easily defeated at the hands of the thunder god Thor. His most recent defeat happened when he Turk Barrett knocked him out and stole his Stilt-Man armor. With his ill-gotten funds dwindling and his inability to get work, Day needs a win that will bring him back into the game. Hearing a radio report about Spider-Man's recent activities, he decides that he will defeat Spider-Man to restore his tarnished reputation.

Meanwhile, Spider-Man is searching the city for any traces of Doctor Octopus and the Owl. With no trace of his foes, Spider-Man decides to return home. Changing back to Peter Parker, the web-slinger worries about upcoming exams and finding work from the Daily Bugle. Just then he gets a phone call from his Aunt May, who Peter promises to visit the next day, and learns that things with her new boarding house are going well and tells Peter to take it easy. With the call over, Peter retires for the night. The next morning, Peter is taking the subway to deliver photos of Spider-Man's battle with Doc Ock and the Owl. Suddenly, his spider-sense begins going off and Peter follows its source. Going into the next car, Peter's spider-sense is going off due to a nervous-looking, seemingly harmless man. Peter wonders why he would be setting off his spider-sense, unaware that this is Wilbur Day. When the train reaches the next stop, Day gets off, and suspicious of what is happening. Peter tags him with a spider-tracer. However, this momentary distract leaves Parker open to a pickpocket. Peter chases after him, catching the thief easily thanks to his adhesive fingers.

While Peter is turning over the thief to the police, Wilbur Day arrives at a Cordco facility where he knocks out the guard at the front gate with a canister of gas. Gaining access to one of the manufacturing facilities, Wilbur gets to work on building a new suit of armor. However, Day's presence isn't totally undetected. When the guard fails to check in with Stark International's head of security, Vic Martinelli, on Long Island, they decide to investigate. Later, Peter has sat down to a meal with Aunt May and her borders. Although Peter enjoys the meal and thinks that his Aunt is doing well, he is still consumed by his own problems. May's fiancee, Nathan Lubenski notices that Peter is bothered by something and advises him to go out and take care of his troubles. The pep talk inspires Peter to go back out as Spider-Man to get action pictures for the Daily Bugle.

As he web-slings across the city, he spots a Stark International security van speeding through the city and decides to investigate. This leads him to Cordco where he goes in ahead of the security guards to find out what is going on. Inside the facility, Wilbur Day is finishing his final touches on his new suit of armor. He catches Day by surprise, but the villain manages to escape into the control room of the lab and activates the defenses. While Spider-Man dodges these weapons, Wilbur finishes his Stilt-Man armor and attacks Spider-Man directly. However, this time, the wall-crawler is ready for his gas by holding his breath. During the battle, Spider-Man notices a sonic disruptor is aimed right at Stilt-Man. The wall-crawler leaps in the way of the blast and is knocked out. With his foe at his mercy, Stilt-Man considers killing Spider-Man but realizes that there is nobody to witness it. Since Spider-Man saved his life, the Stilt-Man decides to spare him instead. He turns the wall-crawler over to Vic Martinelli and escapes. 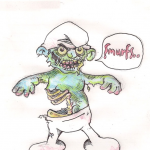