Appearing in "When Warriors Clash--!"

Synopsis for "When Warriors Clash--!" 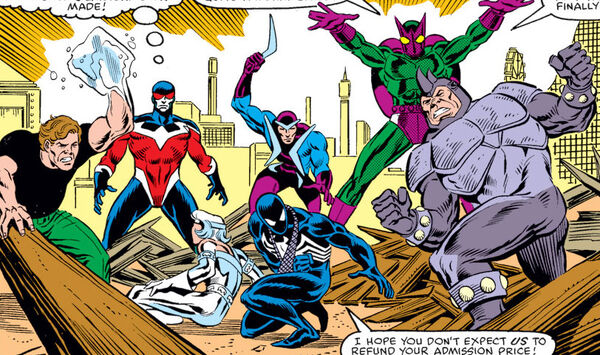 Hired by Jack O'Lantern to eliminate Silver Sable and Spider-Man, the members of the Sinister Syndicate have the pair surrounded after collapsing a wooden roller coaster at the site of Coney Island. Before the Beetle can land the killing blow, the Sinister Syndicate is attacked from behind by the Sandman who has arrived on the scene to investigate the collapse of the rollercoaster. The Beetle orders his comrades to attack the Sandman, which Hydroman is eager to do, since they have an old score to settle. While the Sandman keeps the villains at bay, Spider-Man carries Silver Sable to safety. As Sandman clashes with the Rhino and Hydroman, Spider-Man gets Silver Sable to cover. Sable wants to abort her mission as it is no longer profitable, but Spider-Man doesn't want to leave Sandman alone. When she balks at this, he tells her that he quits. Suddenly, his spider-sense warns him of the arrival of the Beetle and Boomerang, forcing them on the defensive again.

Elsewhere in Manhattan, Jack O'Lantern explains to his men that the reason why he isn't tackling Silver Sable himself is that he has a more lucrative job to do. After putting on his gear, he swears to his minions that after this job they can expect more work coming in. While at the Daily Bugle, J. Jonah Jameson gets a preview of tomorrow's edition and discovers yet another story about the Hobgoblin. Wondering why Joe Robertson is focusing on old news like this, he decides to pay the editor-in-chief a visit in his office. Joe has lost track of time as he was looking over photos of the night the Hobgoblin was arrested. Looking at two different photos of the villain, he tells Jonah that they may have proof that Flash Thompson is not the Hobgoblin. While back at Coney Island, the Sandman is still holding his own against the Sinister Syndicate. However, the tide of battle turns when Speed Demon creates an air funnel with his super speed, threatening to disburse the Sandman's particular mass all over the place. Meanwhile, Spider-Man has stashed Silver Sable in a nearby Ferris wheel and tells her to stay put while he ends the battle. However, the woman refuses to stand back and do nothing. Using her bandana to bind her injured ankle, she slips down to the ground to do her part in the battle.

While at the jail where Flash Thompson is being held until trial, Thompson is about to give up proving his innocence. His lawyer, Sharon Banks, pleads with Flash not to give up no matter how futile the case against him looks. Suddenly, there is an explosion, setting off the alarms. That's when Jack O'Lantern breaks into the holding cell. He stops at Flash's cell, thinking he is the Hobgoblin and explains that he has come to free him. In the confusion, Jack knocks out his lawyer and escapes with Thompson. Soon, the Rose gets a phone call informing him of the jailbreak. He tells this to the real Hobgoblin, who is furious that Jack O'Lantern is ruining his plans. The Rose suggests that if they kill Thompson they can continue their plans. The Hobgoblin loves this idea as it gives him the opportunity to take out Jack O'Lantern as well. Meanwhile, back at Coney Island, the Sandman has reformed himself and knocked out Hydroman. With none of his other allies present, Speed Demon runs off looking for his comrades.

Later, at Jack O'Lantern's hideout, the villain tells his men to keep an eye on Flash Thompson and inform him as soon as Thompson awakens. Jack goes to his room and wonders why Thompson didn't want to be rescued. Suddenly, the real Hobgoblin comes crashing in through the window and furiously attacks Jack for endangering his plans. When the Hobgoblin explains that Thompson was a fall guy, Jack tries to explain that he made an honest mistake. Back at Coney Island, Spider-Man and Silver Sable are pinned down by Boomerang and Beetle. That's when Spider-Man realizes that the antenna on the Beetle's costume regulates his finger blasts. That's when Sable tosses two of her chai's, cutting through the antenna. Regardless of this, the Bettle still has his enhanced strength. Back at Jack O'Lantern's hideout, the battle between Jack and Hobgoblin have distracted Jack's thugs enough for Flash Thompson to break free and escape. By that point, the battle between the two villans has been taken outside. There, the Hobgoblin uses his randomized finger blaster to overpower Jack O'Lantern.

While this is happening, the battle at Coney Island rages onward. Spider-Man manages to get the drop in the Beetle and knock him out so he can focus on Boomerang. While Silver Sable watches the two battle it out, Hydroman recovers and attempts to drown her. Meanwhile, Jack O'Lantern manages to knock Hobgoblin down. Realizing that he can't win this battle, Jack decides to flee while he can. Seeing his foe making his escape, Hobgoblin leaves as well, vowing to get revenge. At that time, Spider-Man saves Silver Sable's life by tossing Boomerang through Hydroman's liquid form. Unfortunately, this leaves him open to being struck from behind by the Rhino. This allows Silver Sable to grab a fire extinguisher and spray it into Hydroman's liquid body, making him violently ill when the chemicals mix in with his body. When Spider-Man recovers from the blow he lashes into the Rhino, beating him into submission. Meanwhile, Speed Demon runs into a trap set by the Sandman. By this point, the Beetle has determined that the battle is a loss and orders his teammates to flee.

In the aftermath, Spider-Man is shaky, but when he asks Sable for payment, she reminds him how he quit. She then offers the Sandman a job, telling him that she could use freelance operatives like him in the future. The Sandman is interested in hearing more and heads off with Sable. Spider-Man is upset because he didn't manage to collect the money he needed to help Flash Thompson with his legal costs. Once he reaches the rooftop, Spider-Man gets even dizzier. This leaves him to wonder if he has a concussion or worse, brain damage. Elsewhere, Flash Thompson is on the run, worried about the police, Jack O'Lantern, and the Hobgoblin. Fearing that he has nobody left to trust, Flash decides to figure a way out of this situation.

The super-powered Sinister Syndicate has both Spider-Man and Silver Sable trapped on Coney Island! Who'll be left to pick up the pieces?