We tell ourselves stories to get through the hard times. And, yes, how we tell them matters. But the truth is, there's only so far they'll take you. You can play the dream in your head over and over, but if you want things to change -- if you want that story to be your life, you have to wake up. You have to make it real. This is my story -- our story.

Appearing in "Back to Basics: Part One"

Synopsis for "Back to Basics: Part One"

Following the dissolution of his company, Peter lands on some hard times as Spider-Man due to Kingpin winning the Mayorship for his protecting New Yorkers during Hydra's usurpation, Fisk has been pretending to be Spidey's biggest supporter and managed to put the web-head at odds against the whole superhero community. Trying to see a positive in his personal life, Peter Parker enjoys his job as a science editor at the Daily Bugle until he is accused by Cindy Lawton of plagiarizing his doctoral thesis from that of Otto Octavius (who occupied his body at that time.) As this was proven by an advanced computer comparison algorithm. the exposure results in Peter losing his job. He later fights with Aunt May over his hiding from the fallout of his company and the loss of his doctorate.

Trying to think of what to do next, he ventures as Spider-Man he manages to thwart an alien invasion upon discovering that it was all a trick of Mysterio. Realizing a monotony of the encounter, Spider-Man webs Mysterio to a building for authorities to take into custody. As Peter, he apologizes for everything from his body swap with Otto to his recent attack by Red Goblin, and makes amends with Mary Jane Watson. Reconciled, the two begin dating again and find some measure of glee.

As Mysterio has decided to represent himself alone in court, despite his lawyer Janice Lincoln having arrived to defend him, as she is determined to invoke mental infirmity. Quentin disagrees as his vaunts his brilliance, but he suddenly sees Janice start vomiting insects, with the judge is torn to pieces by rats, and the court room begins to collapse. Terrified, Quentin finds himself cornered by a disfigured man covered with bandages, threatening to bring him back to Hell if he doesn't prepare a big clash with Spider-Man as per their deal, declaring to have procured him Janice's services to ensure it. Returning to real time, Mysterio suddenly finds himself screaming in the courtroom, to which he is declared mentally infirm; Janice congratulates him for having favored her defensive strategy so well.

Meanwhile, Peter arrives at ESU expecting more difficulties with his doctoral revocation, but discovers that Lawton instead offers him a chance to regain his doctorate as a student. She explains that someone opposed the revocation of his academic qualifications, revealing them to be Curt Connors. While shocked, Lawton affirmed Connors was in control of himself due to his Vibranium pacification chip in his brain stem controlling his transformations. Connors offered Peter a chance at going to school again under the condition of being his lab technician.

An alien invasion hits New York City and the only one who can stop it is… Spider-Man?! But that’s far from all you’ll find here – a revelation from the past puts Peter Parker’s job, relationships, and whole life in jeopardy! And if even that’s not enough, you’ll see a new roommate, new love interests – and a new villain! Spider-Man goes back to basics courtesy of Nick Spencer (SECRET EMPIRE, SUPERIOR FOES OF SPIDER-MAN) and the Marvel debut of RYAN OTTLEY (Invincible)! 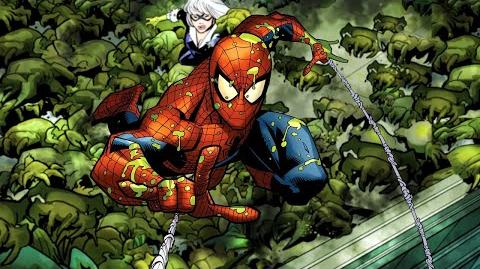 Retrieved from "https://marvel.fandom.com/wiki/Amazing_Spider-Man_Vol_5_1?oldid=5796097"
Community content is available under CC-BY-SA unless otherwise noted.