View source
watch 02:56
Doctor Strange in The Multiverse o Madness - The Loop
Do you like this video?
Play Sound
Part of the Sins Rising arc

1. "The Return of the Green Goblin: Chapter One - Unstoppable"

2. "The Return of the Green Goblin: Chapter Two - The Debt"

3. "The Return of the Green Goblin: Chapter Three - Your Choice"

I know what you're gonna say--we've talked this through. We've made a decision. But that's exactly my problem with this, It's not our decision to make. He came to me, and asked me what to do. He wanted to know if it's what I would've wanted. If I were--If I were the other me. Your me. I get it--confusing. And I tried to answer him the best I could. I thought about how I would feel, if I were... me. But the truth is, I have no idea what that Gwen would've done. We don't have that luxury here, do we? Yes, we all had these visions of Norman killing him. But Miles-- when you talked to him, you told him that was a risk and it didn't change his mind, did it? This is what I'm trying to say-- this is his fight. These are his demons. We may think we know best-- we may think he's wrong-- but hasn't he earned the right to make that choice himself? I mean, come on-- This is Spider-man. There's a reason they call him the best of us. It took me a while to figure it out. The Peter Parker I knew was a very different guy. This one is the real deal. A hero. No matter who tries to stop him, he's going to do what he believes is right. And if we told him that's how he'd die? Well, I'm guessing-- he wouldn't have it any other way. So yeah, I'm Gwen Stacy-- thanks for coming to my Ted Talk.

Appearing in "The Return of the Green Goblin: Chapter One - Unstoppable"

Synopsis for "The Return of the Green Goblin: Chapter One - Unstoppable"

When Norman talked about how he once viewed Peter like the son he never had, Peter held back his rage against the monster who took so much good in his life, so that Norman can take a Goblin Formula and reequip his Green Goblin gear. When fighting Sin-Eater's nigh-immortal followers, Peter's conscience screams that he stop Norman there and now, knowing full well he'll take more from him yet again. Elsewhere, the Order of the Web hold back per Julia's command, explaining to Anya that they're waiting for Sin-Eater to cleanse Norman before intervening. With the group unease over Peter's alliance with Norman in the fight, Gwen voiced a change of opinion asking they don't stop Sin-Eater and help save Norman. As Spider-Man is being overwhelmed, Stanley returned endowed with Juggernaut's immeasurable strength to fight Norman and Peter. The two begin their attack, but find little effort in their newly unstoppable foe.

Appearing in "The Return of the Green Goblin: Chapter Two - The Debt"

Synopsis for "The Return of the Green Goblin: Chapter Two - The Debt"

As Spider-Man knows Norman would have a backup plan within a backup plan, Goblin elaborates his underground river escape, further proving Spider-Man's distrust. While not the time to discuss, Goblin deploys hidden rocket launchers from the walls to buy time as they retreat to lower levels. Due to years of animosity, neither have coordination, forcing Spider-Man to collapse the floor and send them falling to their waypoint. Meanwhile, Gwen argues that their intervention is not their choice to make, but Peter's as he is fighting his own demons and he has more than earned the right to make his own choices. She finishes with the group's understanding that something is behind Sin-Eater, and that should they interfere, something worse could happen. Gwen finishes by asking for a vote on what to do. Under the fallen rubble, Norman reminds Peter of when they "met" as Spider-Man and Green Goblin unmasked, how Peter rejected him. Norman clarifies that, in that moment, his Goblin formula had made him lost and shattered, how his twisted mind only wanted Peter to love him like a father. Since then, Norman hated Peter, even the times he was saved by him. Feeling indebted, Norman thus "repaid" Peter by removing the rubble from him and helped him to his hidden base. Peter finds an EMP bomb, strong enough to blackout half the East Coast, but Norman again diverts focus to their escape as Sin-Eater catches up to them.

Appearing in "The Return of the Green Goblin: Chapter Three - Your Choice"

Synopsis for "The Return of the Green Goblin: Chapter Three - Your Choice"

When Spider-Man remembers how he fought the real Juggernaut, he has Norman set the EMP to cause liquefaction in the concrete beneath. Once Norman activated the altered EMP, Spidey holds Sin-Eater long enough for the ground to liquify and bury them, with Stanley questioning why he'd sacrifice himself for Norman. As Peter sinks, content he saved others and did the right thing, he remembers MJ and chose to survive. However, Norman hovers over him atop his glider narrating that he made plans to make a spectacle of Spider-Man's demise, but takes a win by simply drowning Peter in concrete. Thankfully, the Order arrive to rescue Peter, explaining their presence and vacating on Norman's escape boat. Aiming to exit in the Hudson, Peter plans to hide Norman first before finishing Sin-Eater, but they are distracted by Norman's perverse sniffing around Gwen. Pleased to see Gwen alive, or at least her doppelgänger, Norman's comments about her and the people around Peter make him break. Knowing Norman won't stop killing people he loves and cyclically blaming himself, Peter "made a different choice" and threw Norman out to be prey for Sin-Eater; with Julia commenting that it was now too late for him. Elsewhere, an understanding Kindred doesn't blame Peter for his actions, seeing one wrong to do so much right. In his cemetery, Kindred narrates that Peter still hasn't learned the lesson that his sins never stay buried.

Peter accompanies J. Jonah Jameson to an exhibition where the largest ruby in the world is exhibited, to take pictures. The ruby, however, is inhabited by a mystical entity that takes possession of Jonah and controls the minds of the other guests in the exhibition. Peter escaped from mind control, confronts him and manages to free Jonah and the others.

One evening while he is patrolling, Spider-Man hears a call coming from a cube of light. He goes in and saves a magical dog from an angry knight.

Appearing in "A Family Affair"

Synopsis for "A Family Affair"

Adrain Toomes gifts his granddaughter Tianna a set of artist pencils, but after he is spooked seeing Spider-Man, she leaves him to confront Spider-Man to keep him away from her grandfather. While not understanding her motivations at first, after her explaining Toomes is her grandfather and getting hit by multiple elephant tranquilizers, Spider-Man mentioned Toomes has killed people. Initially opposed the notion, but after Spider-Man cites Nathan Lubensky and Gibbon, Tiana realizes she may by lying to herself about her grandfather, and leaves an unconscious Spider-Man as she flies away.

• As if things weren’t bad enough for Spider-Man with Sin-Eater’s reign of terror reaching riot level… THE GREEN GOBLIN IS BACK!

• Spidey has been through a lot, but even the worst things that have ever happened to Spider-Man have just been a prelude for what happens here, with an epic main story by a veritable Hall of Fame of Spider-Creators. 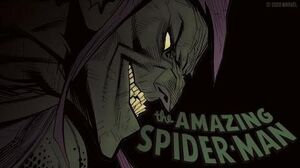